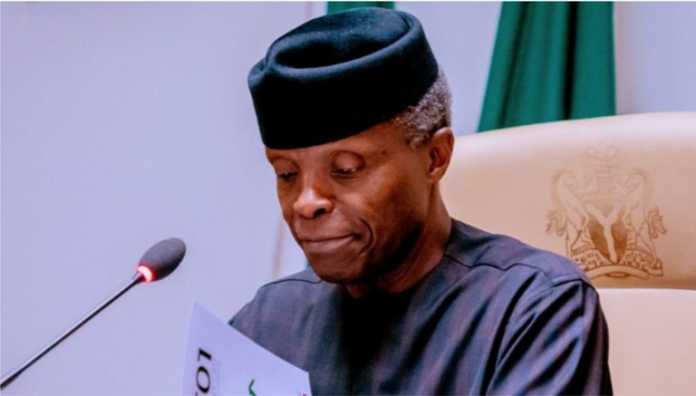 Vice President Yemi Osinbajo has rebuffed reports that he had hinted former Governor Emeka Ihedioha on the likely outcome of the Supreme Court’s judgement when he visited Imo state last week Thursday.

A statement released by Laolu Akande, spokesperson of the Vice President of Nigeria, described the reports as false and mischievous.

However, Jackson Ude, Former Director of Strategy and Communication to President Goodluck Jonathan, publisher and founder of Pointblanknews.com. was one of the rumour peddlers.

On his Twitter page on Tuesday, Ude wrote: “VP Yemi Osinbajo hinted former Governor Emeka Ihedioha on Thursday that there was a gang up against him and he must reach out to some folks in Abuja ASAP. Ihedioha flew with the VP to Abuja, but his efforts to reach out was just too little, too late. The gangsters won!.”

Laolu Akande, however, confirmed that Osinbajo was in Imo for a private event and had nothing to do with the verdict which nullified Ihedioha and declared Hope Uzodinma as the rightful governor of Imo state.

VP Osinbajo and his wife, Dolapo were in Imo state on Thursday for the funeral of late pastor Ebenezer Ewuzie, the Rector of Redeemer’s International Leadership Academy. His remains was laid to rest at his hometown in Okwelle, Onuimo Local Goverment Area, Imo State.

The statement by Laolu Akande read: “I have seen reports suggesting that VP Osinbajo had a discussion with former Gov. Ihedioha about the Imo Guber case in the Supreme Court when he visited Imo last week. This is false and mischievous. The VP went to Imo for a private event and no such discussions took place.

“Besides, it is completely out of character for the VP to discuss on-going court cases with interested parties, with insinuations of illegal and unethical conspiracies. Please ignore such fake reports wherever you may find it. Outright fabrication!”

Crime Watch News Agency - July 15, 2020 - 10:01 am 0
President Muhammadu Buhari has suspended over 10 senior officials of the Economic and Financial Crimes Commission, EFCC, according to PM News.

The Misfirings Of the “Wake and Sleeping” Governor Obaseki

OPINION News Agency - July 15, 2020 - 8:38 am 0
With the political environment becoming very tense due to the continued own goals been scored by the current ATM machine for the...

FG toying with our future by cancelling WASSCE –...

Ize-Iyamu will satisfy the yearnings of Edo people for...

The Misfirings Of the “Wake and Sleeping” Governor Obaseki