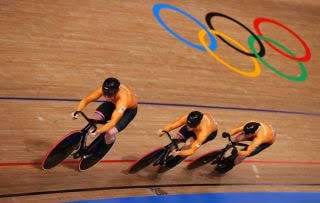 The Netherlands dominated Britain to win the men’s team sprint on Tuesday and end Britain’s 17-year-old hold on the gold medal.

Roy van den Berg, Harrie Lavreysen and Jeffrey Hoogland set a new Olympic record of 41.369sec in the final, which was more than three seconds faster than Britain’s 44.589.

Leaked chat between BBNaija’s Boma and another married woman...