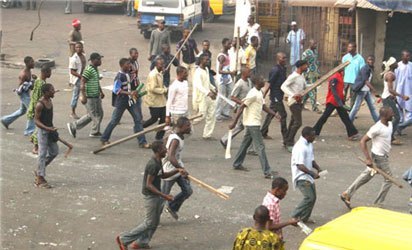 It was gathered that the blood bath that led to the loss of lives ensued over disagreement on who handles a major multinational oil company security contract in the area.

An indigene of the area, identified as Jerry, who confirmed the incident said there is a battle for supremacy among two groups on who controls an oil security contract running into millions of Naira.

Meanwhile, the leadership of Ijaw Youths Council, IYC, Worldwide has condemned the bloody conflict and has called on Governor Douye Diri and security agencies to intervene to bring the situation under control before its escalate into further breakdown of law and order in the area

IYC in a statement signed by its President, Peter Igbifa, also appealed to the warring parties to sheathe their swords saying it was irresponsible for brothers to pick arms against themselves.

Igbifa said instead of bloodshed the brothers should sit down in a roundtable to discuss the issues and resolve grey areas of their differences insisting that dialogue remained the best tool in dispute resolution, adding that the IYC was willing to work stakeholders of Bilabiri and security agencies to restore the peace in the area.

Igbifa further urged the state Governor, Senator Douye Diri, to raise a peace panel that would work with all the parties in the dispute to identify the causes of the crisis and permanently resolve them.

He said: “It is irresponsible and unbelievable that our brothers will shed their blood because of a job that is coming to their area. As a council, we condemn the bloody conflict in Bilabiri and we are asking those involve in thos dastardly act to stop further bloodshed.

“The Council is calling on security agencies especially the police to move into the community and restore the peace to avert further breakdown of law and order. We are also appealing to our Governor, Senator Douye Diri to raise a peace panel that will identify the remote and immediate causes of the conflict and permanently resolve them.

“The IYC is ready to work with security agencies and all the parties involved in the conflict to ensure it doesn’t happen again”.