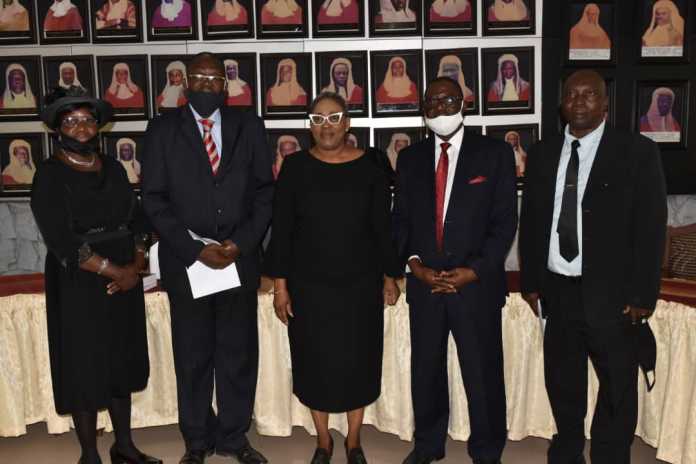 The Ogun State Chief Judge, Justice Mosunmola Dipeolu has sworn-in three new Presidents of Grade 1 Customary Courts of Appeal into the Customary Court in the State.

Justice Dipeolu admonished the newly Presidents to be very lenient, calm, steadfast and friendly with litigants and the Panel members of the Customary Courts of Appeal in dispensation of their justice.

She added that the newly Presidents, Mr. Enitan Fadina, Mr. Olayinka Ojo and Mrs. Olasunkanmi Lala were appointed on merit, noting that they have knowledge, wisdom and charisma to serve the state in that capacity.

While taking an oath before the Ogun State Chief Judge and the Ogun State Customary Court of Appeal President at the Conference Hall, Isabo, Abeokuta, Justice Dipeolu said they must be corrupt free, and shun other vices that can bring their integrity into disrepute in the course of their duties.

“In fact corruption is the bane of evils and great vices being committed by the people in the country, you need to do away with corrupt and abuse of the privilege been conferred on you, as you were appointed to the Customary Courts of Appeal on merits”, Dipeolu stated
Earlier, the President, Customary Court of Appeal, Justice Mobolaji Ojo stated that the newly Presidents taken their oath would no doubt strengthen the capacity and enhance the dispensation of justice at the grassroots level in the State.

He said that the State Judiciary has remained a beacon, a shinning star on the horizon in terms of judicial integrity in the country, noting that Customary Courts were the closest to the grassroots in the Judicial hierarchy.

“Customary Courts are the closest to the grassroots in the judicial hierarchy, hence the way you discharge your duties will go a long way in engendering confidence in the overall system of administration of justice in the State.

He charged them to be fair and firm, resolute but humane in the discharge of their duties, saying that they should treat their Panel Members with whom they were to sit in judgement with respect, courtesy, civility and understanding, bearing in that their Court was essentially a court of facts and common sense.