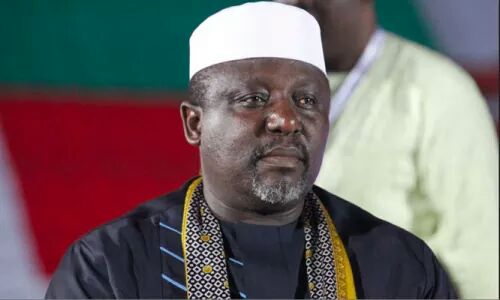 Rochas Okorcha, Governor of Imo State, has offered some bizarre insight into why political office holders, especially governors, “must steal”.

In an interview with Channels TV, which has now gone viral on social media, Okorocha explained that “no man on earth” lives on his monthly pay, hence governors should not be exempted.

He argued that what is most important is for governors to make the people happy with their performance.

“What the people have failed to know is that… for God’s sake let them give targets. I am for targets,” he said.

“If I give you target and you perform it, that is good enough. But if you keep searching for some level of corruption, that’s when it looks like it’s vindictive —because there is no man on earth, in Nigeria, from A to Z, who will say he lives with the money you pay him monthly.

“But if you give target, excuse me, you then perform your work, and people see the way you have done it and it is correct, they’re are fine. In Imo state now, people are happy with the performance; they are happy that their children are going to school without school fees, they are happy that they are no longer suffering… free education is there up to university; they’re happy.”