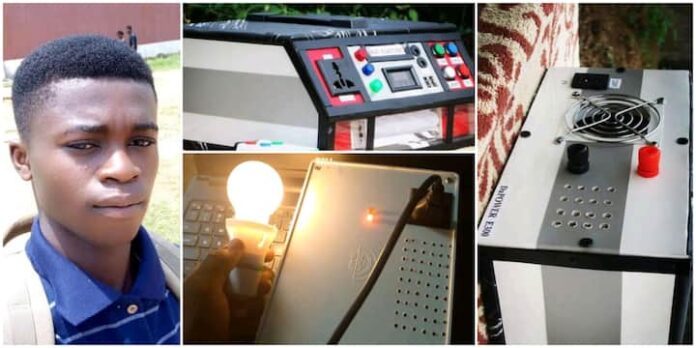 A 300-level student of Federal University of Technology Akure has developed a laptop power bank, power station and emergency wall lamp One of the electrical and electronics engineering scholar’s invention which can store up to 300 watt-hours of energy is capable of charging 6 laptops and 21 smartphones The wall lamp’s internal battery of 10,000mAh helps the device stay on for hours and has temperature control, overcharging protection and over-discharging protection.

The 300-level student identified as Adu Iyanu described his inventions as mighty.

According to FUTA Bro, the laptop power bank can power a laptop from 0 to 100 twice as well as charge smartphones.

But it is the power station that has more charging power.

It can power laptop 6 times Adu told FUTA Bro that the power station called DuPower E300 can charge an average laptop 6 times and a smartphone of 4000mAh 21 times thanks to its ability to store 300wh of energy. While his emergency wall lamp has interesting features such as temperature control, overcharging protection and over-discharging protection. It also has a remote control to easily switch on and off the lamp.

People praise the young man for his invention Iamyemiakins remarked:

“This is so impressive and highly commendable!

“He needs sponsors for mass production of all these, I’m sure he will invent more when he gets the needed empowerment.” Ceenachi wrote:

“They won’t see this type of young man and help him, all they care about in this country is rubbish like carrying some people inside doing nothing and dishing them millions of Naira, not thinking about the less with potential, what a zoo we live in.”
READ MORE: Nigeria emerges first in West Africa to testrun 5G technology

“Nice one, this is what we’re expecting from this great institution.” Bliss Ayodeji stated: “I hope he gets Govt. Funding…he has great potentials.”