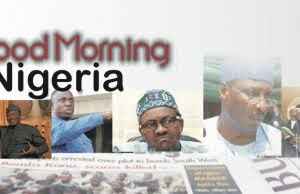 1. The Presidency has disclosed that President Muhammadu Buhari will on Saturday (Today) jet out of Nigeria. A statement by his spokesperson, Femi Adesina said Buhari will “embark on an official visit to Nouakchott, Mauritania to attend the 31st Ordinary Session of the African Union Assembly of Heads of State and Government from June 30 to July 2, 2018.”

2. The prophet behind the viral audio message, which warned Nigerians to pray against disasters in some days has been unmasked. Report says Prophet Udensi Godlove of Land of Oil Prophetic Ministry (AKA Hill of the Lord), Lagos is the face behind the voice.
In the audio, which went viral few weeks back, the preacher specifically warned his congregation and Nigerians to pray and avoid traveling out of Lagos on some certain days. He said, “I saw a lot of dead people and over flow of blood, please let’s be careful.
“June 23, June 28, July 11, July 24, July 30 and August 1, these days have been marked for evil and disasters.

4. The Secretary General of the United Nations, UN, António Guterres, has expressed concern over the killing of innocent Nigerians in Plateau and surrounding states. He also expressed worries over the latest Plateau attacks by Fulani herdsmen that claimed the lives of almost 200 villagers on Saturday. He described the trend as being detrimental to regional stability.

5. The Pentecostal Fellowship of Nigeria, PFN, has in strong terms, condemned the incessant killings in some parts of the country, especially the recent ones in Plateau States. PFN called on President Muhammadu Buhari government to be more committed to the safety of lives and property of Nigerians, adding that any government that cannot protect its people does not deserve to remain in office.

6. Switzerland has decried what it termed lack of transparency in the Nigerian Government’s handling of repatriated $1bn funds looted by late Head of State, Sani Abacha. This was lamented by the country’s Ambassador to Nigeria, Eric Mayoraz, yesterday in Abuja. Mayoraz said the Swiss Government insisted on the involvement of the World Bank in the management of the $322.5 million to ensure that the money was spent to alleviate the sufferings of the poor.

7. The Chief of Army Staff, Lt Gen. T.Y Buratai has said that the current crisis in Plateau, Benue, Taraba and Zamfara States were internally and externally induced. He said so many forces were against Nigeria. Buratai stated this on Friday when he addressed the press during the Army Day Celebration in Maiduguri, the Borno State capital.

8. The Governor of Sokoto State, Aminu Waziri Tambuwal has called on Nigerians to ignore a “satanic video” linking him to the killing of over 200 persons in some villages of Barkin Ladi local government area of Plateau State. Tambuwal, who was on a condolence visit to the Government and people of Plateau State, alongside governors of Bauchi, Zamfara, Benue, Imo, Delta and Nasarawa states, as well as Deputy Governors of Kaduna, Akwa Ibom, Oyo, Ondo and Edo states said he had no hands in the incident.

9. Following Tuesday’s exit of the Super Eagles from the 2018 FIFA World Cup, members of the team have started leaving their Essentuki Camp in Russia in trickles. Ademola Olajire, the Director of Communications of Nigeria Football Federation (NFF), disclosed that most of the players have left Russia for their respective bases.

10. Bauchi State House of Assembly has finally confirmed Architect Audu Sule Katagum as the Deputy Governor of the state. The lawmakers confirmed Katagum during its plenary on Friday presided over by the Speaker. Honourable Kawuwa Shehu Damina Katagum, until his confirmation, was the Chief of Staff, Government House