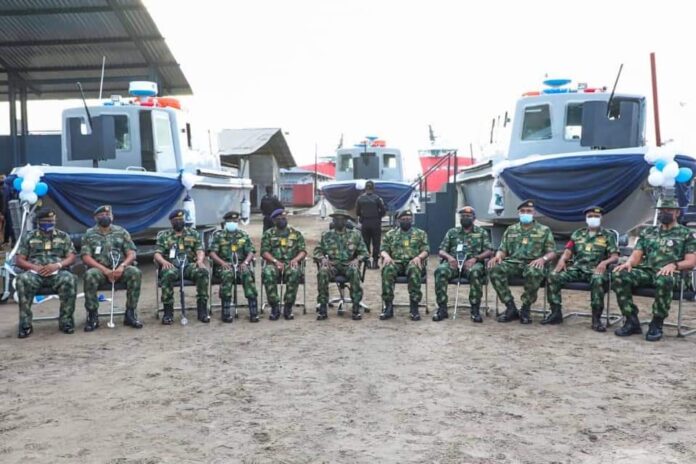 The Chief of Defence Staff, General Lucky Irabor, inducted the gunboats on behalf of the Nigerian Navy in Lagos.

Irabor said at the induction that the four armoured gunboats were built by the Naval Shipyard Limited, Port Harcourt, Rivers State.

According to him, the new platforms will provide the needed protection for troops patrolling the nation’s maritime environment to prevent internal and external threats.

He said: “Unarguably, Nigeria’s maritime environment is a reservoir of natural resources, including oil and gas, that constitute the mainstay of Nigeria’s economy.

“So, the protection of these resources is a priority for the Federal Government to sustain socio-economic activities and enhancement of peace and stability of the Niger Delta.

“At the core of our commitment is the provision of adequate logistics support to our troops deployed in the region and across the country.”

Irabor said the inauguration of the gunboats, built locally, reaffirmed the resolve of the Armed Forces to clear all illegalities and criminalities at the nation’s maritime space.

He said: “So, this goes as a warning to all recalcitrant elements posing threats to peace and security of our maritime space that we are taking the war to them.

“The Defence Headquarters shall not relent in providing the needed resources to Operation Delta Safe to ensure the security of the Niger Delta.”

The defence chief said the headquarters had concluded plans to develop the nation’s Military Industrial Complex capability to meet its local defence needs.

He said the decision informed why the military body awarded the construction of the ballistic gunboats to the NSL.
Irabor said: “We took this decision to wean our country from over dependence on foreign military technology, boost our local technology base and conserve foreign exchange.

“I want to see an Armed Forces of Nigeria that is capable of sustaining itself to a reasonable extent in terms of military hardware for land, maritime and even air operations.”

Irabor said the defence headquarters would soon award another five units of armoured gunboats to the shipyard to boost local production and improve naval presence at the waterways.

Taking delivery of the gunboats, the Chief of Naval Staff, Vice Admiral Awwal Gambo, said the NSL had the requisite manpower and expertise to construct ships, boats, barges and houseboats, among others.

He said the NSL, like the Naval Dockyard Limited in Lagos, also rendered support services in the repairs and maintenance of platforms in the nation’s fleet.

Gambo said: “So, the construction of these semi-ballistic gunboats is yet another milestone achievement by the NSL in the provision of necessary support to the ongoing efforts at combating maritime threats.

“The gunboats will bolster the operational capacity of the Joint Task Force SS Operation Delta Safe in the Niger Delta area.

According to Gambo, the navy will soon take delivery of a 43 metres Seaward Defence Boat III built by the Naval Dockyard in Lagos.