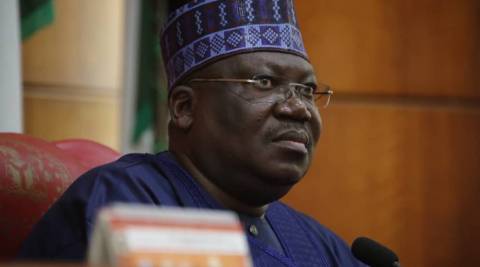 The Senate President, Ahmad Lawan, has said that the National Assembly is concerned about the mounting debts of the country resulting from persistent borrowings.

There have been growing concerns on the loans taken by President Muhammadu Buhari’s government as analysis puts the country’s domestic debt stock at N18trillion.

Nigerians have blamed Lawan-led National Assembly for Nigeria’s debt because the federal lawmakers have not declined any request for approval of loans by Buhari.

Speaking with journalists on Wednesday in Abuja, Lawan, however, said the country needs to generate more revenue to reduce its borrowing.

“Nobody likes taking loans or debt whether as an individual or a country,” the senate president said.

“But what do you do when you are not generating enough? We are concerned about our level of borrowing, and the best way to reduce it is to get funds from independent sources.
“We expect that when we generate more, we borrow less.”

Lawan also boasted that the National Assembly under his leadership had stabilised Nigeria’s economy and polity.

“This National Assembly I dare say has stabilised the Nigerian economy. Anybody that wants to challenge this statement can do so,” he said.

“I also dare say; the ninth national assembly stabilised the polity. Imagine every day we were fighting either ourselves or the executive, we know there is a price to pay.

“Mark me, some of the people saying these people (calling the national assembly names) are ignorant or mischievous because they don’t want us to succeed.”