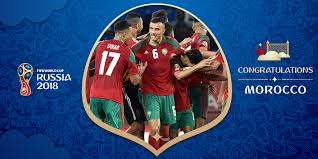 Morocco became the first country to take its case against officiating at the on-going World Cup to football governing body, FIFA.

Morocco, which was in group B of the competition in Russia, complained that a series of officiating mistakes facilitated its ouster from the competition, especially in matches against Portugal and Spain.

Nigeria, Senegal and Peru also have their own grouse to grind with the referees, whose conducts have been subject of debate among the neutrals in Russia.

In its complaint to FIFA, Morocco said ‘serious errors’ led to its inability to qualify for the second round, adding that the video assistant (VAR) referee system has been used to favour its opponents.

The VAR has been subject of debate among teams and fans here, with some countries complaining that the system was being manipulated to favour some teams. To Nigerians, Turkish referee, Cuneyt Cakir deliberately ignored a hand ball that would have given Eagles win over La Albiceleste in their decisive last group game on Tuesday. Argentina won the game 2-1 to leapfrog Nigeria to second place and a spot in the second round of the competition.

In a letter sent to FIFA President, Gianni Infantino, Morocco said: “We want to express our indignation at the injustice suffered by our national team, following serious refereeing errors that led to [the team’s] premature exit from the first round of the 2018 World Cup.”

The letter signed by Morocco’s FA president, Fouzi Lekjaa, added: “The severity of these refereeing errors is all the more evident in the fact that in these two matches [against Portugal and against Spain], the use of VAR served only to preserve the interests of our competitors.”

It pointed to three incidents in its game against Portugal, including Cristiano Ronaldo’s goal early in the game, saying that it should have been disallowed because a Portuguese player committed a foul before the strike.

In the 2-2 draw against Spain, Lekjaa listed five decisions that erroneously went against his country, including Spain’s added time equaliser

“With what has happened we can only express our serious concern at the persistence of these injustices and the negative impact on the image of FIFA and the future of football,” he said