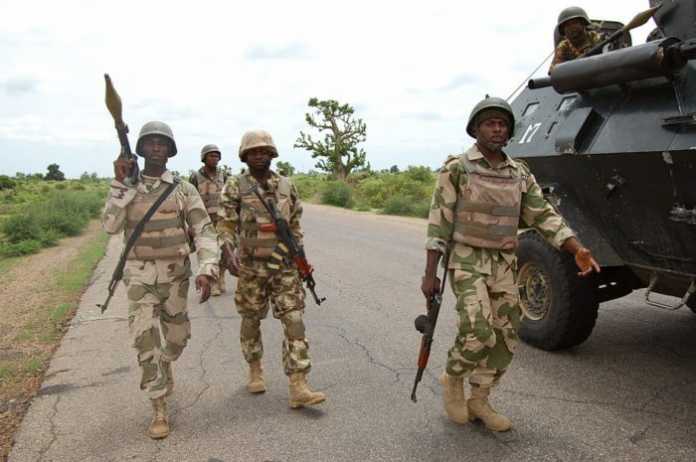 Authorities of the Joint Military Task Force in Niger Delta code named Operation DELTA SAFE (OPDS) has denied complicity in the invasion and burning down of Letugbene community in Ekeremor Local government area of Bayelsa State.

Indigenes of the coastal town of Letugbene in Ekeremor local government area of Bayelsa had on Monday evening alleged that some military men in search of the alleged killers of four soldiers and a civilian tugboat captain invaded their community.

According to the community, no fewer than four houses and two suspected pirate camps were reportedly razed in the coastal enclave on the Atlantic shores of the state by troops.

The invasion, according to a community source, could be termed a retaliatory move by the military following the killing of their personnel and a civilian by some suspected sea pirates along the Letugbene waterway.

It was learnt that the soldiers were escorting a barge conveying some equipment belonging to one of the multinational oil companies operating in the western axis of the state when they came under attack on Sunday afternoon.

But the military task force, Operation Delta Safe, in a statement yesterday and signed by its spokesperson, Major Victor Olukoya, the mandate of the task force is to ‘Protect oil and gas infrastructure, deter and prevent militancy, sea robbery, crude oil theft and other forms of criminality within the joint operations area that could impact negatively on economic activities in the Niger Delta’.

The statement said though the incident was unfortunate, that “The troops while carrying out their routine duty within its area of responsibility on Sunday 16th February 2020 at about 6pm, they were ambushed by unknown gunmen and four soldiers were killed in action. However, investigation is ongoing to ascertain the person’s or groups behind the attack”.

‘It is important to state here that contrary to an online report; that the men of OPDS did not invade any community in Ekeremor LGA of Bayelsa state as a result of the incident.’

‘Please be informed that the Nigerian military is an organised and disciplined force and all its operations are guided by codes of conduct and rules of engagement. Thus, cannot be seen to behave in the manner that was reported.’

‘The commander Operation DELTA SAFE along with Commander 16 Brigade and Commander Sector 2 on operational visit were in Letugene, Beneside, Ogbotobo and Tunu and among other communities in the LGA, and observed citizens going about their lawful duties without any hindrance.’

‘The commander therefore, urged the good people of Ekeremor LGA to please remain law abiding, as the command will fish out the perpetrators of the ungodly act and ensure a secured environment for all.’

Coronavirus: Isolate if you visited our Abuja office this...

Coronavirus: Panic in Bauchi as residents await result of...