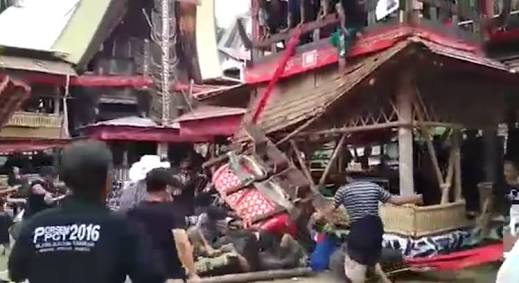 A grieving son has been crushed to death by his own mother’s coffin during her funeral procession.

Samen Kondorura, 40, was carrying his mom Berta’s coffin during a service in Indonesia’s Parinding valley, in the North Toraja district.

Dozens of onlookers were filmed watching the elaborate ceremony, as pallbearers made their way up a wooden ladder.

They waited for a brief moment, waiting for helpers to dress the lakkian, a tower where the deceased is placed.

As they resumed the procession, one pallbearer missed his step shifting the ladder, which collapsed almost immediately.

Dozens were sent flying onto the ground, with horrified onlookers screaming and rushing to Kondorura’s aid.

After he was struck, Kondorura was taken to a hospital, where he died.

Julianto Sirait, chief commissioner of the Tana Toraja resort police force, told AFP: “As the mother’s coffin was being raised to the lakkian, suddenly the ladder shifted and collapsed, the coffin fell and hit the victim.”

Video from the scene, which has gone viral online, shows the ladder slip just as the casket enters the tower, sending the men tumbling several metres to the ground where the victim is struck by the coffin.

Kondorara’s body has been laid to rest beside his mother, it has been reported.

Indonesian tradition requires the casket to be placed on a lakkian, a carved tower where funeral rites are read.

Such ceremonies can last for days, with services involving music, dance and the sacrifice of water buffalo.