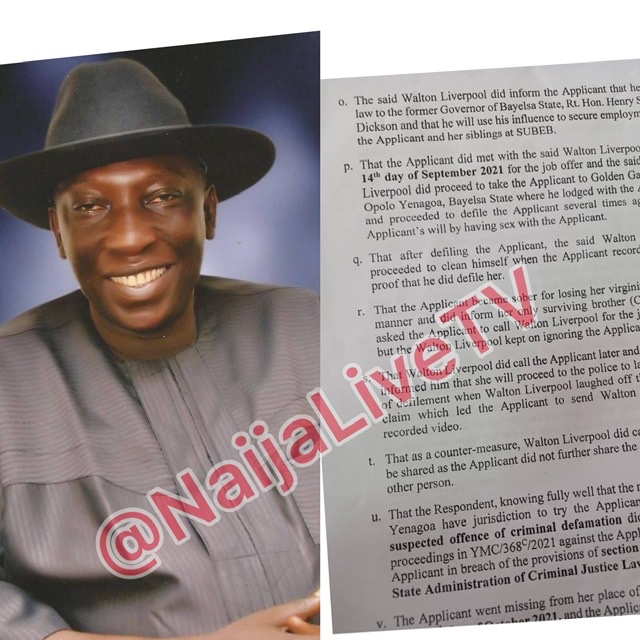 A 19yrs-old elder Brother of a minor who has been arrested by the men of the Department of State Security Service (DSS) for Allegedly leaking a Naked video of a retired permanent secretary in Bayelsa has accused Mr. Liverpool of defilement of his 17yrs-old sister who is currently in the custody of the DSS.

The Victim, NAIJA LIVE TV gathered who is from Ekeremor local government area of Bayelsa state is being detained at the pleasure of the DSS since her arrest on the 6th day of October 2021 by the DSS until now on the suspicion of having committed the offence of criminal defamation against a retired Bayelsa Permanent secretary and in-law to Former Governor Seriake Dickson, Mr. Walton Liverpool without any complaint, charge or information preferred against the Victim.

The elder brother to the victim stated that, Mr. Walton Liverpool defiled the victim [NAME WITHHELD] in a hotel in Yenagoa when she was invited by Liverpool after promising to give her and her siblings employment at the State Universal Education Board (SUBEB)

Mr. Clinton further stated that his sister did record the naked video of the over 65yrs-old retired Permanent Secretary but did not shared the video to anyone as accused.

The elder brother to the victim further accused Mr. Walton Liverpool of deliberately did cause the video to be shared as counter-measure because the victim did not further share the said video to any other person before the video went viral.

His words Thusly;
“The Victim is the only daughter of our parents and resides with me at Akenfa-Epie community before she was arrested since on the 6th day of October 2021 by the DSS”

“The said Walton Liverpool did inform and promised the victim that he is an in-law to the former Governor of Bayelsa State, Rt. Hon. Henry Seriake Dickson and that he will use his influence to secure employment for her and her siblings at SUBEB which make her fall for him”

“It was after defiling her, the said Walton Liverpool proceeded to clean up himself when the victim recorded him as proof that he did defile her”

“The Victim later became sober for losing her virginity in such a manner and did inform me as the only surviving brother (Clinton) and I asked her to call Walton Liverpool for the job promised but the Walton Liverpool kept on ignoring her calls.

“When Walton Liverpool later call her back, she informed him that she will proceed to the police to lay a complaint of defilement against him but Mr. Walton Liverpool laughed off her claim which led her to threatened him by sending him her recorded Naked video of him” – Clinton stated.

The Brother to the victim further told NAIJA LIVE TV that he only became aware that it was the DSS that arrested the victim when the DSS brought her to search their house on the 8th day of October 2021 and confiscated his mobile phone and other gadgets that belongs to the victim.

The suspected victim NAIJA LIVE TV gathered went missing from her residence in the Akenfa area of Yenagoa the bayelsa state capital since on the 6th day of October 2021 before the men of the secret police (DSS) brought her to court to for a remand order.

NAIJA LIVE TV reported that, On the 13th day of October 2021, the DSS brought the victim for a remand proceeding in YMC/368C /2021 at the Magistrate Court 4, sitting in Yenagoa and the court did remand the victim in the custody of the DSS for further investigations.

It was further gathered that the men of the Nigerian secret Police (DSS) have denied the Victim access to her family, loved ones and even Lawyers. on the 14th day of October 2021 on learning that the victim was remanded in the DSS custody, counsel to the victim Barr. E. A. Aluzu, Esq., also proceeded to the DSS office at Capt. Amangala street to see the victim but was denied access to the victim.

citing section 35 and 41 of the Constitution of the Federal Republic of Nigeria. Counsel to the Victim Barr Aluzu argue that the said detention of the Victim by the DSS is a breach of the victim’s fundamental right to personal liberty and freedom of movement as contained in the Constitution.

The lawyers reactions was contained In an EX-PARTE MOTION brought pursuant to the order 39 and 42 of the High Court Rules of Bayelsa State 2010; and under the inherent jurisdiction of the court.

He further stated that the DSS is a statutory body created by the provisions of section 1(c) of the National Security Agency Act and charged with the responsibility for the prevention and detection within Nigeria of any crime against the internal security of Nigeria. the protection and preservation of all non-military classified matters concerning the internal security of Nigeria; and such other responsibilities affecting internal security within Nigeria as the National Assembly or the President, as the case may be, may deem necessary. This is provided for by section 2 of the National Security Agency Act.

Barr Aluzu said, the victim is being detained at the pleasure of the Respondent and being denied her right to personal liberty and freedom of movement in violent violation of the provision of section 35 and 41 of the Constitution of the Federal Republic of Nigeria.

“The victim, having been taken into custody by the Respondents since the 6 th day of October 2021 ought to have been released on bail as a matter of course”

“The victim is not arrested or being detained for any capital offences punishable by death and ought to be entitled to the favourable discretion of the court” – the Lawyer Stated.