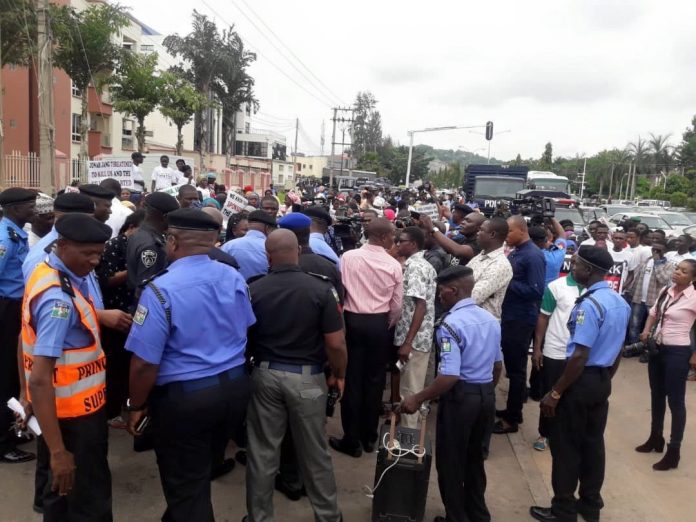 Over 500 protesters on Monday paralyzed commercial activities in Abuja, the nation’s capital over the recent killings in three local government areas of Plateau State as well as Taraba State.
The aggrieved protesters, who besieged the Police Headquarters in their numbers, called on the security agencies to pick up elder statesman and erstwhile Chief of Army State, General Theophilus Danjuma as well as former Governor of Plateau State, Senator Jonah Jang over the recent attacks, which led to loss of lives and valuables worth millions of naira.
The Middlebelt Peace Network, who championed the protest, stressed that the duo must explain their involvement in the recent bloody attack on the Plateau, especially their recent crude comments on the state of the nation.
Jayeola Mohammed, who led the protest, recalled that Jang, a member of the People’s Democratic Party (PDP), had vowed to make the state ungovernable for his successor, Simon Lalong.
Mohammed further claimed that Jang, who was recent arrested by the DSS over issues bordering on corruption and abuse of office, had sworn to extinguish the peace of Plateau State and replace same with anguish and despair by empowering youths in the area with weapons.
He opined that the intelligence community and the civil police must be activated to investigate the connections between those killing Nigerians under the cover of whatever crisis and those calling for people to bear arms against fellow citizens.
He noted, “It is common knowledge on the streets of the towns in Plateau State that the former governor had used the assigned resources to procure arms and ammunitions for hired thugs in the state. The ranks of these thugs were further swollen with the importation of mercenaries to carry out the recent attacks.
“These killings of innocent people are meant to undermine the credential of the current administration at the centre, which has security of life and property as a cardinal point on its agenda.
“The thinking is that once they can add Plateau state the other states where their bloodthirsty coven incessantly kills people they will be able to accuse President Buhari of having failed to deliver on his election promises. It must be regrettably pointed out that human life cannot and must not be devalued by making killing people part of a political game.
“However, we believe that to be able to bring perpetrators of these heinous crimes to book, it is time to do away with political correctness and go after the sponsors that are already known to law enforcement agencies. To this end, we want to draw Mr. President’s attention to the culpability of the former Plateau State Governor, Senator Jonah Jang in the recent outbreak of crisis in Plateau State.
The group also General Theophilus Danjuma, who has been making inflammatory comments capable of heating of the polity.
Mohammed noted that the prosecution of the Danjuma would go a long way for the culture of impunity not to be precedential for the corporate existence of Nigeria.
He noted that TY Danjuma’s recent outbursts were unbecoming of a statesman, describing it as quiet unfortunate that the Nigerian citizens would still witness such an unguarded statement by a former player in the Nigerian project.
“No Nigerian citizen is bigger than Nigeria but Nigeria is indeed bigger than him. It is high time he is arrested and questioned,” he posited.
Commissioner of Police, Esa Ogbu, who received the protesters on behalf of the Inspector General of Police, Ibrahim Idris, urged them to assist the Nigeria Police Force and other security agencies with relevant information that could help them in fishing out persons or group of persons behind the unrest in the country.
He called on all Nigerians to continue to be law-abiding and as well intensify prayers for sustained peace in the country.