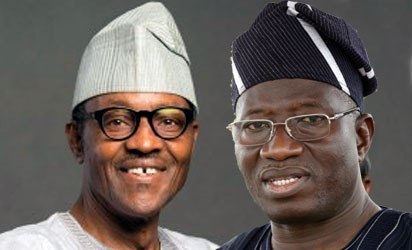 Former president Goodluck Jonathan has thrown his weight behind ex-President Olusegun Obasanjo, for pointing out the country’s security and socio-political maladies affecting the nation.

In not less than 14 paragraphs letter written by Obasanjo to Buhari on Monday, the former advised the later to act fast before the country is thrown into anarchy.

Affixing his position to Obasanjo’s, Jonathan during his condolence visit to Reuben Fasoranti, leader of Afenifere, in Akure, Ondo state capital, averred that insecurity is getting worse under Buhari.

His words, “The issue of security must be approached from a different dimension. We cannot continue the old way because it is getting out of hand. We hope the federal and state governments will do something about it.

“Every generation face problems and this generation must find ways to solve these problems. Every government faces problem. The first commercial kidnapping, because it involved money, happened in 2006 when I was the governor of Bayelsa state. From that time, it moved to terrorism in the north. Now, it is a major problem in the country.

“The federal government in conjunction with state government must design a different approach to this issue. I was there as president and security challenge was there but now, it is getting worse every day and we can’t continue to use the same old method.”

“I believe the federal government should set up a special unit like we set up EFCC and ICPC to handle corruption cases, so that they will know that their responsibility is to manage this kidnapping, killings and the rest. We can’t continue like this, it is not possible.

“We can’t even talk about managing the economy of this country when people are not save. The economy is for the people, people must be alive to enjoy the infrastructures. If you do all the roads in the country and people cannot move about, the roads become meaningless.

PDP’s candidate cannot be sworn in as Bayelsa Gov...