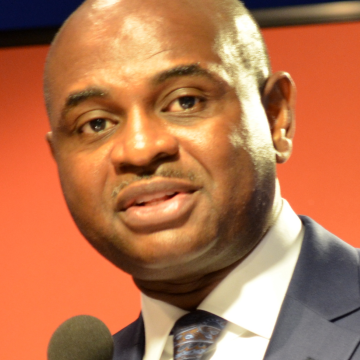 Exactly 25 years ago, a landmark election was held in Nigeria after ten long years of military rule. There were two main contestants: Moshood Abiola of the Social Democratic Party and Bashir Tofa of the National Republican Convention. Abiola was from the South-west: Tofa from the North-west.

Presidential aspirant and Young Progressive Party (YPP) candidate in the fast-approaching 2019 elections, Professor Kingsley Moghalu, has said Nigeria is faced with exact same problems the nation had in 1993.

#NaijaLiveTv exclusively gathered that Moghalu, who made this position known in a statement in commemoration of June 12, opined that “Nigeria does not have new problems, but old problems that have deepened”.

“25 years ago, Nigerians came out in large numbers to send the military back to their barracks. They came together across tribe and tongue to make a clear statement in the freest and fairest election in Nigeria’s history. Briefly, the heavens opened, and we got a glimpse of what Nigeria could be.

“Moshood Kashimawo Olawale (MKO) Abiola’s campaign was about hope—hope that Nigeria could live up to its promise. Hope that at last, the most populous black nation on earth could take its rightful place in the world.

“June 12, 1993 was the high point of that hope. It was the day when Nigerians arrived at the ballot box sick and tired of the status quo. They were so tired that in that election, Northerners voted massively for Abiola, a Southern candidate, with Bashir Tofa his challenger, losing his home state of Kano.

“That hope was snatched from us by our military overlords and remains so till this day.

“We go into the 2019 elections faced with the exact same problems we had in 1993. Nigeria does not have new problems, but old problems that have deepened. Even when the military clothes are replaced with an agbada, the problems are the same,” he stated.

The presidential hopeful went further to state that “With a candidacy that offered hope, Abiola sought to solve those problems, but those who think themselves lords and masters over us denied the will of the people. Many of them are still alive today, still deciding who gets what.

“But I believe that the hope of June 12, 1993 still resides in Nigeria. I believe so because in my travels across the country and interaction with Nigerians, I see the same distaste for the status quo that existed in 1993. I see the same desire for something bold, new and different. I see the same thirst for a government that is truly on the side of the people”.

“I saw that desire for something different in a brief conversation with Ahmed, a farmer in Nasarawa. He had lost most of his farmland to herdsmen, and repeated calls to the police to act have gone unanswered. While speaking to me through a translator, he said: “It has never been this bad. I have lost all I own.”

“Chinedu, whom I met during a town hall in Ebonyi, lost his job and has been unemployed for months, and does odd jobs just to make it through the day. I got a letter recently from someone in Port Harcourt, who lost her child due to a lack of oxygen at the hospital. She wrote: “Please help stop more children from dying.”

“The spirit of June 12 is not just about the past, but the future. It is about whether we can, as a people, reach out and reclaim the promise of that day.

“The significance of this day goes beyond recent attempts to use it for partisan political advantage. To honour a man truly is not to give him titles and declare holidays. To honour a man is to keep his legacy and carry on the vision he wished for the people he hoped to lead.

“As an entrepreneur himself, Abiola understood the power of enterprise and industries. He didn’t pay lip service to it, he got involved in alleviating poverty to the highest level that he could as a citizen.

“June 12 stands for something much bigger than public holidays. It embodies the hope of Nigerians for a future that is better and more prosperous than the past and present.

“To make this future our reality, we must come together and recognise that we need a clean break from the status quo to forge a new path to prosperity. We must realise collectively that our current political class are incapable of delivering on the promise of Nigeria.

Read Also: Fidelity Bank collaborates with NGOs Ahead of 2018 World Sickle Cell Day
“Nigerians who flocked to the ballot box 25 years ago understood this and voted unequivocally for an end to what was then 14 years of military rule.

“They chose to ignore empty promises and intimidation to participate in an election that will stand for all time.

“To honour their sacrifice of those who fought and died for the restoration of that mandate, and stay true to the spirit of June 12, we must restore that hope that our country can be better.

“We must refuse to give in to the cynical people who say nothing can be done, who say it has all been decided already.

“It is time to get off the wheel of misfortune and pave a new road to the Nigeria we desire. It is time to replace our songs of woe with a new song. It is time for fresh leadership and a decisive approach to nation building.

“One of the lessons of June 12 is that we have our future in our hands. If we heed this lesson, new possibilities will open up for us,” the statement read.