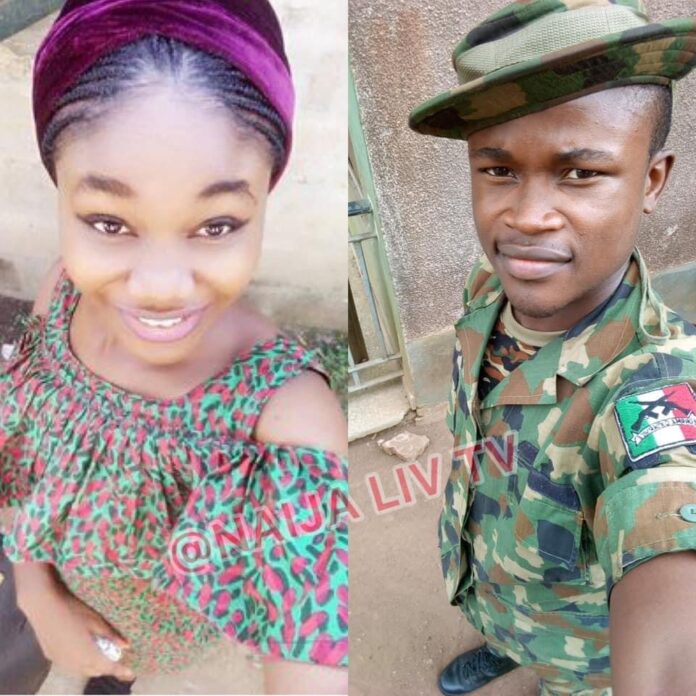 A Jealous Military Personnel identified as Jay Matol has allegedly stabbed and shot to death Miss Jennifer Agadu , a 200 levels student of the Faculty of Education of the Niger Delta University, Wilberforce Island in Southern Ijaw Local Government area of the State.

According to security personnel attached to the Institution, the corpse of the 21 years old undergraduate was discovered on Tuesday with stab and bullet wounds with a finger on the right hand cut off in apparent struggle with her killer.

NAIJA LIVE TV gathered that there were signs of struggles as her thumb was almost cut-off as a result of the apparent struggle,” her room was reportedly scattered and filled with bloodstains.”

Many have expressed concern over why the neighbors did not hear of bullet gunshots causing the wounds.

NAIJA LIVE TV gathered that Jay Matol, who was identified as her military lover, was accused of killing her after he posted some grievous comments unto the whattsup page of the 200 level students, claiming to have murdered her due to cheating and emotional frustration.

According to some of the deceased colleague, the suspected military personnel claimed that he has informed her mother and his own aunt of his action and that two of her friends identified as Vera and Eniye , were not giving the deceased good advice.

He was also quoted to have accused the girl of wasting five years of his life on the storming relationship and threatened to commit suicide in hiding.

According to a student of Education in the Institution, ‘we were shocked to hear what he was posting and we quickly informed the institution authority. He accused the girl of cheating and use of diabolic method to charm him. But most students know the couple amd their violent relationship.”

When Contacted on the development, the spokesman of the Bayelsa Police Command, Asinim Butswat, confirmed the incident, but said the police is cross examining some witnesses that came forward for statements.