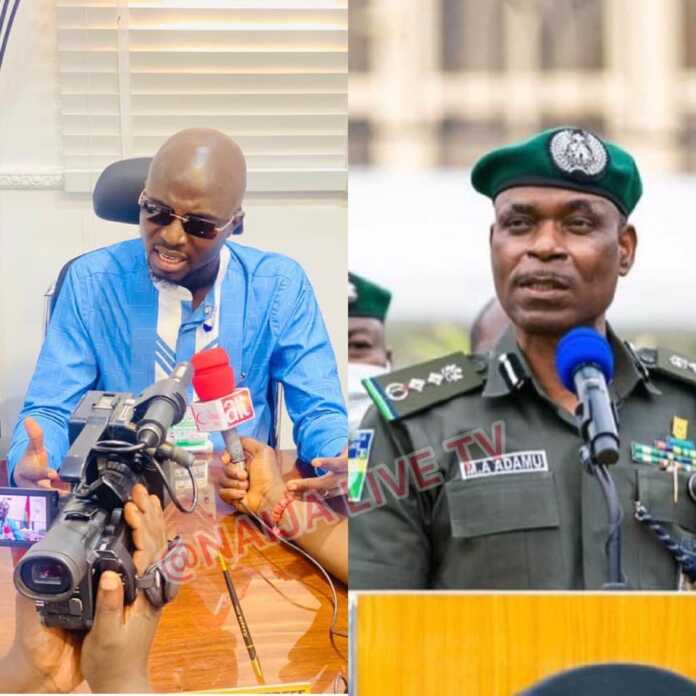 A CALL FOR URGENT INTERVENTION TO THE INSPECTOR GENERAL OF POLICE OVER THE ARREST/ADOPTION OF ONE MR KINGSLEY JOSEPH BY A TEAM OF POLICE OFFICERS HEADED BY ONE INSPECTOR BONZE PALASOU OF FORCE CRIMINAL INVESTIGATION AND INTELLIGENCE DEPARTMENT(FCIID) ON THE 8th OF FEBRUARY 2021 IN YENAGOA.

The attention of the Ijaw Youths Council has been drawn to the arrest/adoption of one Mr. Kingsley Joseph, an illustrious Ijaw son from Bilabiri community in Ekeremor Local Government Area of Bayelsa state by officers of Force Criminal Investigation and Intelligence Department(FCIID), led by one Inspector Bonze Palasou since February 8th 2021 alongside one Chief Jack Angila from Ezetu town in Southern Ijaw Local Government Area of Bayelsa State.

In a statement issued to press men from his Yenagoa office, the Spokesperson of the IYC Comr. Ebilade Ekerefe stated that since the date of the arrest/adoption, Mr Kingsley Joseph has been severally denied access to family members, friends and even his solicitor till date.

The Spokesman of the Council said it has become so worrisome as available intelligence report points to the fact that Mr Kingsley has been kept in handcuff on both hands and legs and subjected to the most dehumanizing conditions which has led to a deteriorating health condition.

Comr. Ebilade further said that up till date, the alleged officers of the FCIID has deliberately refused to allow his lawyer access nor state the crime upon which they have been arrested .

It is pertinent to noted that under our statutes particularly section 36 of the 1999 constitution of the Federal Republic of Nigeria as amended , entitles anybody to fair hearing no matter the gravity of the offense committed.

Council is further informed that Mr Kingsley is being moved from one detention center to another . He was first detained at the Area Command Cell, Opolo and later moved to Azikoro Town Police station and now to an unknown location in Warri.

This is a case of gross violation of their fundamental human rights as enshrined in the Constitution .

The Ijaw youth council frowns vehemently at this naked violation of their rights and admonishes the police command to desist from such unethical and illegal actions capable of replaying the recent mass actions arising from these severally condemned acts of the Nigerian police .

While we applaud the continuous discharge of her obligations as security personnel such actions must be guided and within the ambit of the law . Anything done in gross violation will only lead to unforeseen and unpredictable reactions by the citizenry.

According the spokesman of council calls on the Inspector General of the Nigerian police Mohammed Adamu to intervene immediately, cause for the immediate release of the two ijaw illustrious sons and allow the due process to be followed strictly in furtherance of her police duties . He warns that given the volatile nature of our region it is unwise and an act capable of thwarting the fragile peace.

The IYC Spokesman stated that this has become necessary as Ijaw youths will no longer tolerate Polices brutality, indiscriminate arrest of Ijaw people for exploitative purposes which has become the order of the day in Ijaw territories.

Lady advises people to have sex using a condom...