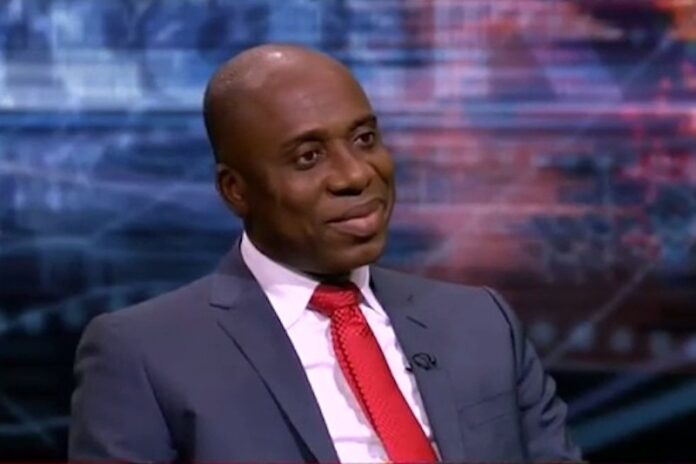 The Ijaw Youths Council (IYC) Worldwide has queried the Transport Minister and former Rivers State Governor, Rotimi Amaechi’s silence on the agitation of stakeholders for a substantive board of the Niger Delta Development Commission (NDDC).

The President of IYC, Peter Timothy Igbifa, in a statement on Tuesday to herald the new year wondered why Amaechi hitherto known for his boldness in speaking out had remained unusually quiet since the agitations for justice and fairness started in NDDC.

“The silence of leaders like the Transport Minister, Rotimi Amaechi, on the illegality at the NDDC is no longer golden.

“Why has Amaechi, who is known for his boldness and for withstanding all opposition to support President Muhammadu Buhari, suddenly lost his voice concerning the NDDC? Amaechi and other leaders must explain to us the reason for their silence”, he said.

Igbifa, who reflected on some of the achievements of the council since he took over its leadership, also condemned President Buhari’s silence on the NDDC board during his  recent speech to inaugurate the hostel project completed by the commission in Uyo, Akwa Ibom State.

He said though the extension  of Effiong Akwa’s tenure as the Sole Administrator of NDDC expired on December 31, 2021, the Presidency was doing nothing to inaugurate the NDDC Board.

He said: “We condemn the silence of Mr. President on this board matter. President Muhammadu Buhari portrayed himself as an insensitive leader when he failed to speak on the matter during his recent speech to inaugurate the hostel project built by NDDC at the University of Uyo, Akwa Ibom State.

“It is obvious that persons surrounding the President and who wrote that speech for him are misrepresenting him because the real Buhari that we know would have  inaugurated the NDDC board at least as a new year gift to the  Niger Delta people who gave  him the goodwill of regional peace like no other”.

The IYC boss said the council would continue to demand transparency and accountability in NDDC and called on the President to make the forensic audit report of the commission public.

He, however, asked Ijaw politicians and persons sympathetic to the course of the Ijaw Nation to begin consultations and grassroot mobilisation to actualise the vision.

“Politics has gone beyond ethnic divide. Do your home work and avoid the pull-him-down syndrome. Ijaws are very desirous to produce the next governors of Rivers and Delta states for which Delta Ijaws are consulting already hence, we call on Rivers Ijaws to begin their consultation”, he said.

Igbifa said the IYC would monitor the implementation of the Petroleum Industrial Act (PIA) to ensure it would not become another political strategy to steal billions of naira to run  the 2023 elections.

He advised local government area and communities in the Niger Deltz to embrace unity in setting up their management teams to work with the oil multinationals.

Among other things, he said the IYC would take agitations for wetland conservation of the Niger Delta to the United Nations; pursue youth empowerment with emphasis on job creation; take deliberate actions against oil firms for destroying the environment and monitor the activities of all interventionist agencies.

While commending Bayelsa State for promoting Ijaw activities considering the pressure this puts on the state and her lean resources but our Prayers are with you, Igbifa said the IYC would work with other youth bodies to protect the interest of the Niger Delta.

He said: “We will work with every other ethnic youth bodies within the region for synergy to drive our regional pursuit. We will insist on a regional security architecture for Niger Delta.  The BRACED commission must involve the Niger Delta youth leadership in the recruitment of  security personnel for the regional security outfit.

“We will continue to kick against our marginalization, constant degradation of our environment, prevalent oppressions, blackmailing and undue suffering of the Niger Delta”.