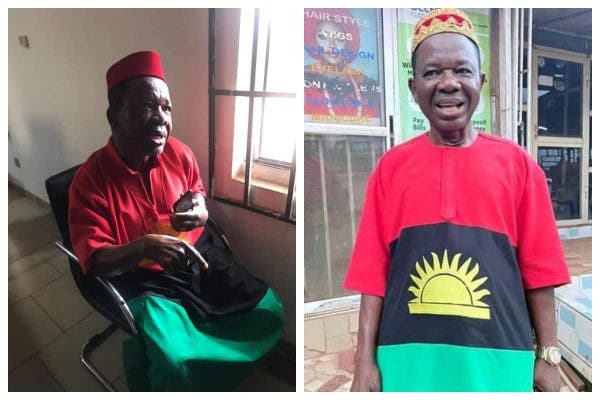 Veteran actor, Chiwetalu Agu, says his journey to the custody of the Department of State Services didn’t start well.

He narrated that officials of the DSS jostled to handle his case, adding that he was treated with respect.

The actor spoke during a welcome party organised by the Actors Guild of Nigeria.

Chiwetalu was released from Army custody last Friday, a day after he was arrested for putting on an outfit with semblance to the Biafran flag.

He said, “It didn’t start well but God took control. I was only buying bread for the poor. Soldiers came in and started scattering things.

“That drama that took place was important so that they will know that Igbo are here. That moment of Upper Iweka till the time we got to the army barracks close to Zik Mausoleum, to 82 Division of the Nigerian Army and to DSS office in Abuja, nobody touched me. They treated me with respect.

“Every officer wanted to be involved in the case so that they can have opportunity to interact with Chiwetalu Agu.”

NAIJA LIVE TV had earlier reported that soldiers arrested the actor around Upper Iweka Bridge in Onitsha for wearing an outfit with Biafra inscriptions.

Agu was reportedly on a charity mission to the less privileged when he was arrested by soldiers.

The Nigerian Army in a statement said that the actor was arrested “while inciting members of the public and soliciting for support for the proscribed Indigenous People of Biafra”.

Movie Review: 19 years after, Aki and Pawpaw fail to ‘grow up’