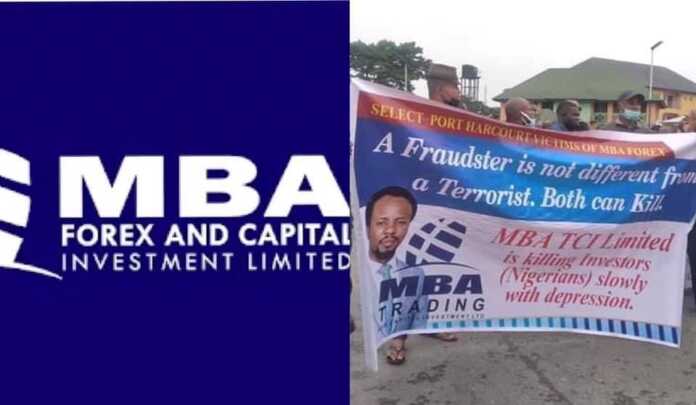 Some investors of MBA Forex and Capital Investment, on Wednesday staged a peaceful protest to the South-South Zonal office of the Economic and Financial Crimes Commission (EFCC), in Port Harcourt, the Rivers State capital.

The latest effort to reclaim their trapped funds is coming few weeks after some investors petitioned the Lagos State Police Command over the issue, which led to the arrest and quizzing of Mr. Maxwell Weli Odum, founder of the MBA Forex.

The investment company which promised 15% return on investment for deposits starting from N350,000, kept to it until November last year when they ran into trouble waters following alleged mismanagement of the funds by Odum.

At the protest in Port Harcourt, the investors appealed to the EFCC to help them recover their capital and to prosecute the embattled Odum for fraud.

Shortly after a meeting with the South-South Zonal director of the EFCC, the leader of the protesters, Christian Agadaga, said the Central Bank of Nigeria (CBN), revealed that MBA Forex has over N176 billion of investors’ money in its account.

On his part, the Chairman of the Rivers State Civil Society Organizations, Enefaa Georgewill who was in solidarity with the investors, urged them to give the EFCC time to handle the case.

The (CBN), in a suit Number FHC/PH/MIsC/35/2021, filed before the Federal High Court sitting in Port Harcourt on the 10th of February, sought an exparte motion seeking an order of the court to stop all debit transactions from MBA accounts.

The court on the 11th of February ordered that accounts maintained in any bank in Nigeria by the company be forthwith frozen for a period of time sufficient for the CBN to conclude the ongoing investigation and inquiry into the affairs of the company.

According to the CBN, investors from Port Harcourt made up 43.45 per cent of the total investors.