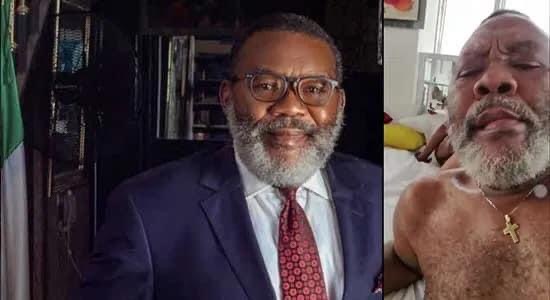 A leaked video ALLEGED to be that of Imo State PCC Commissioner, Chief Willy Amadi which was unknowingly or knowingly recorded by him where two ladies who were having s3x in a place that looks like a government office/house, has gone viral on social media.

The 12 seconds s3xtape which first surfaced yesterday, appeared to have been captured by Amadi himself in a location that appeared like his private residence although it was unclear how the tape got to the public domain.

It was seen in the leaked video recorded by the Imo PCC commissioner where two girls were captured in the background making out on a bed while he filmed the raunchy scene in a reflected glass bedroom.

A twitter user who uploaded the video, captioned it: “Imo State PCC Commissioner, Chief Willy Amadi unknowingly or knowingly recorded himself and two ladies who were having s3x in a place that looks like a govt office/house. Very mumuish thing to do. So who leaked the video? Himself or ladies?”

VIDEO: ‘Wife of man who accused Apostle Suleman’ of...

EXCLUSIVE: Identities Of “Repentant” Bandits Given Hilux Vehicles By...