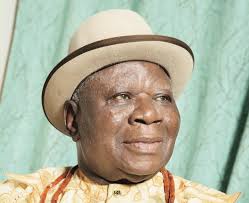 Ijaw Elders Forum, IEF, in Lagos State, on Sunday, felicitated with elder statesman and Ijaw leader, Chief E. K. Clark on his 93rd birthday, describing him as a man that stood and fought for the rights of minorities and the down-trodden.

In a statement by its Chairman and Secretary, Bukazi Etete and Efiye Bribena, respectively, IEF Lagos stated that “on a day like this we recall with nostalgia and pride the quality of leaders the Ijaw nation has provided in ensuring peace, love and unity in our country.

“Ijaw leaders have always contributed sacrificially to the unity, peace and well-being of Nigeria.”

“With the current state of insecurity and disunity in the nation, we would like to appeal to other sectional leaders to emulate the good works of Chief Clark by putting aside selfish and section interests to work for the peace, security, progress and unity of Nigeria.

“Leaders should shun all forms of nepotism, tribalism and corruption and promote the virtues of integrity, peace, love, probity, sound reasoning and selflessness.

“As we celebrate this great leader, we call on all well-meaning Nigerians to draw the attention of our leaders today to halt the drift to the abyss by emulating the values of our revered founding fathers.”

WE CELEBRATE A TRUE “LIVING LEGEND”, AN IROKO OF OUR COMMON ASPIRATIONS AND A PRIDE OF OUR GREAT HERITAGE AS A PEOPLE,

AS HE CLOCKS THE ENVIABLE AGE OF 93 YEARS.

DADDY, WE CELEBRATE AND ARE INSPIRED BY YOUR CONTINUED LEGACY AND HARDWORK. ON THIS AUSPICIOUS OCCASION, WE CONVEY BEST WISHES  AND PRAYERS FOR MANY MORE HEALTHY AND ACTIVE YEARS AHEAD.

RCCG Excommunicates Pastor Who Was Caught While Trying To...