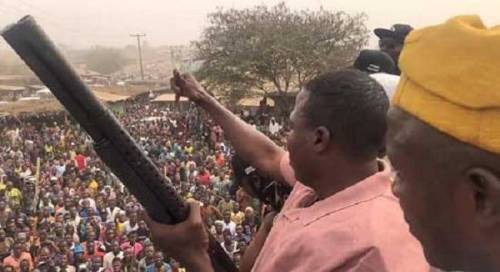 Lead agitator for self-determination for Yoruba ethnic group, Sunday Adeyemo, popularly known as Sunday Igboho, insists he has not committed any offence to warrant trial by the Beninese government.

Speaking exclusively with reporters, through his lead counsel, Chief Yomi Alliyu (SAN), at the weekend, Igboho noted that the Beninese government was only acting on Nigeria’s directive.

This came as the agitator spends his 117th day in Benin prison today.

Igboho had been arrested on Monday, July 19, 2021, by the International Criminal Police Organisation at the Cadjèhoun Airport in Cotonou, the Republic of Benin on his way to Germany.

He had apparently fled Nigeria after a bloody raid on his Soka residence in Ibadan, Oyo State by the Department of State Service (DSS) which accused him of stockpiling arms.

The following Thursday, July 21, he was arraigned before the Cour D’Appel De Cotonou which adjourned the case till the following Monday when it further adjourned indefinitely on the grounds that it was investigating the case against the activist.

The court ordered that he should be remanded in a facility in the country pending the conclusion of the investigation.

Meanwhile, there were speculations that the Federal Government was making moves to extradite him to Nigeria to face terrorism charges.

But the Federal Government, through The Minister of Justice and Attorney General of the Federation (AGF), Mr Abubakar Malami, said, last week, that it was not opposed to political solution to the Igboho case and that of the IPoB leader, Nnamdi Kanu, currently being tried in an Abuja court for terrorism.

Alliyu said that, following the prolonged resumption of the case against the activist in the Benin court: “lgboho is still in Cotonou, he is not facing any trial as far as Nigeria is concerned.

“As I usually say, Cotonou is Nigeria’s 37th state. When they sneeze in Nigeria, they catch cold in Cotonou. Igboho has not committed any offence that will make him to face any trial in Cotonou.

“He can be in Cotonou as long as he wishes on ECOWAS protocol. So he has no trial in Cotonou.”

Also, speaking on the trial of lgboho, the apex leader of the umbrella body of Yoruba Self-Determination Groups, Ilana Omo Oodua, Professor Banji Akintoye, said the judiciary system in Benin Republic is different from the one we practice in Nigeria, saying an investigative judge remanded him.

Adeleye, said: “Here in Nigeria, it is the police, EFCC or DSS that investigate and take matters to court but, over there, they have a judge that investigates after the police must have leveled their own allegation.

“The judge will now investigate and table his findings before a judge that will do the trial.

“l am quoting what Ibrahim Salami, one of his (Igboho) lawyers over there said. Then the trial judge will table his ruling before another judge who will give judgment.

“So the investigative judge said he is still investigating and the court remanded him.

“But we know that the Nigerian government is the one behind it. We all know Benin Republic is the 37th state of Nigeria and they rely so much on Nigeria on trade.

“Ninety percent of the people who do business in Cotonou, if properly investigated, they are there because of Nigerians.

“Benin is trying not to lose trade while protecting Igboho but we want to commend their courage of the government of Benin Republic not to handover Sunday Igboho to the Nigerian government illegally.