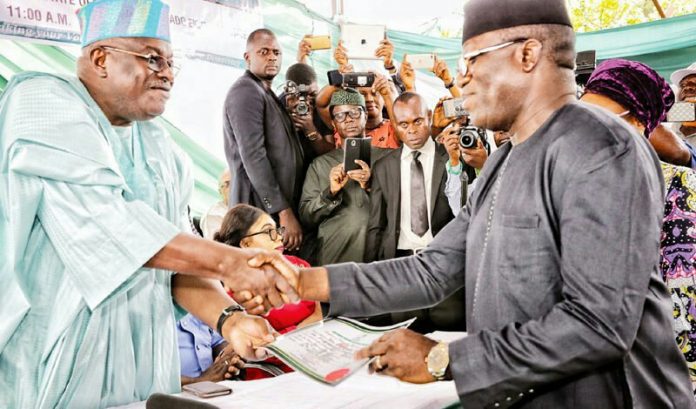 Ekiti State Governor-elect Dr Kayode Fayemi has promised not to disappoint the people who gave him the mandate in last Saturday’s election.

Fayemi spoke yesterday after he received the Certificate of Return as governor-elect from the Independent National Electoral Commission (INEC).

The National Commissioner in charge of Oyo, Ekiti and Osun states, Prince Adedeji Soyebi, presented the certificate at a ceremony at the state INEC headquarters on New Iyin Road in Ado-Ekiti, the capital.

Fayemi and Egbeyemi were joined by their wives, Bisi and Margaret.

Other dignitaries at the presentation are: Chairman of the Senate Committee on Trade and Investment, Fatimat Raji Rasaki; the state APC Chairman, Chief Olajide Awe; Police Commissioner Bello Ahmed; State Director of DSS, Mrs. Promise Iheanacho; the Commandant of the Nigeria Security and Civil Defence Corps (NSCDC), Mr. Solomon Iyamu and heads of federal agencies in the state.

The certificates presented to Fayemi and Egbeyemi were signed by INEC Chairman, Prof. Mahmood Yakubu; the governor-elect and the deputy governor-elect also signed the documents.

The governor-elect said the people of Ekiti State will enjoy the benefits of good governance from October 16 when he takes over.

He hailed the electoral agency for doing what he called an “excellent job”.

Contrary to claims by the ruling Peoples Democratic Party (PDP), Fayemi affirmed the election, which returned him as winner, was “seamless, free, fair, credible and violence-free”.

There was massive security build-up on New Iyin Road and the vicinity of INEC office as people streaming to the place were frisked before they were allowed entry.

Security was provided by the Army, the police, and the Department of State Services (DSS).

A police helicopter hovered over the INEC office throughout the period of the ceremony.

Fayemi noted that INEC should be praised for conducting a process of 14 steps, which culminated in the presentation of the Certificate of Return.

The governor-elect noted that INEC did a yeoman’s job in delivering the election in a credible and professional manner, despite the fears expressed in the build-up to the poll.

The former minister of Mines and Steel Development also praised security agencies for providing security back-up, which gave the electorate confidence to come out and exercise their franchise.

The governor-elect also expressed appreciation to traditional rulers for their stabilising roles in the run-up to the election and others who contributed to the success of the election.

“Ekiti people will see the benefit of good governance, by the grace of God, as from October 16.”

The Resident Electoral Commissioner (REC), Prof. AbdulGaniy Raji, was delighted the election was held, despite the tension preceding it.

Raji hailed the electorate for the maturity it displayed before, during and after the election.

He noted that with the conduct of the poll, Ekiti is moving higher.

The REC hoped that future elections in the state will be successful.

Soyebi said the presentation of the certificates marked the end of the process of the Ekiti governorship election.

The INEC commissioner, who described Ekiti as a homogenous state, urged residents to continue being their brother’s keeper.

He said: “Today marks the end of the (governorship) election in Ekiti State on the part of the commission, which is the presentation of Certificates of Return to the governor-elect and the deputy governor-elect.

“If there are issues arising from the election, there is another arm of government that will take care of that. This is another important day in the history of the state.

“On behalf of the commission, I congratulate everybody. Ekiti has pointed the way forward in conducting elections in Nigeria.”