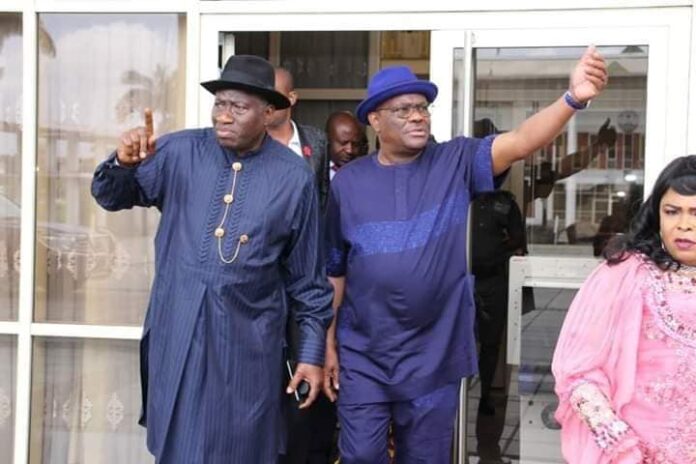 Rivers State Governor, Nyesom Wike has said he will not support former President Goodluck Jonathan if he defects to the ruling All Progressives Congress (APC) to contest in the 2023 presidential election. Wike made this disclosure in an interview with BBC Pidgin on Thursday.

This came after a former aviation minister and chieftain of the Peoples Democratic Party (PDP), Femi Fani-Kayode defected to the APC on Thursday.

There have been reports that Jonathan may soon defect to the APC.

Recall that the National Secretary, APC Caretaker, and Extra-ordinary Convention Planning Committee, John Akpanudoedehe, had stated that ex-President Jonathan would be given a founding member status if he joins the ruling party.

Akpanudoedehe also said the former President would be allowed to contest in 2023 on a fair ground.

Reacting on BBC, when he was asked if he will support Jonathan to secure the presidency he lost in 2015, Wike said he will only support him if he contests as a member of the PDP despite that they both hail from the same South-South region of the country.

“When you said pick ticket, from which party? Is it APC or PDP?” Wike queried.

“To pick ticket means you’re representing the interest of a party. I’m in PDP and I will not be involved in anti-party activities. If he is APC, I won’t support him because I’m not into that kind of politics.

“It is not about ethnicity for me, but about the party. If he joins APC I can’t support him,” Wike added.

President Muhammadu Buhari Presidency had started courting Jonathan since 2020 to bring him into the APC to run for the presidency and succeed Buhari.

The Presidency cabal wants to make Jonathan the next president as they know he won’t investigate atrocities committed by Buhari’s regime.

However, Jonathan was said to have given certain conditions to Buhari’s cabal which have yet to be fully fulfilled hence the delay in joining the ruling party.

Recall that in May 2019, an Abuja Division of the Federal High Court discharged and acquitted Jonathan’s cousin, Robert Azibaola, of $40 million laundering charges filed against him by the Economic and Financial Crimes Commission (EFCC).