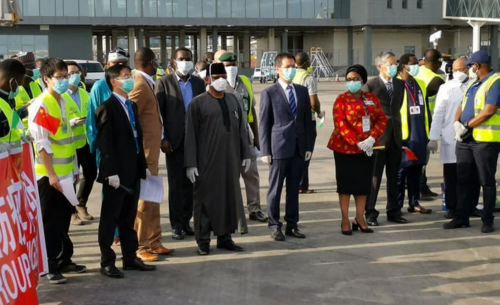 Minister of Health, Osagie Ehanire, has said he was at the airport to receive medical supplies from the China Civil Engineering Construction Corporation (CCECC) and not the Chinese medical experts.

The 15-man medical team from China had on April 8 arrived at the Nnamdi Azikiwe International Airport, Abuja in a chartered Air Peace aircraft.

They were received by a delegation of the federal government and officials of the Chinese embassy.

But speaking on Channels Television’s Sunday Politics, Ehanire said medical supplies from CCECC and the medical experts came in via same flight.

“How long the Chinese medical experts are here, depends on the length of their visa. The Minister of Interior can have a better idea about that

“It is the medical supplies from the CCECC that I went to receive, not the Chinese medical experts who also came in via the same flight,” he said.

There was confusion on the whereabouts of the team after Ehanire told reporters that he preferred not to be asked where they were.

Before then, Lai Mohammed, Minister of Information, had said the doctors had assisted in installing equipment in some isolation centres.

I saw pictures of my wife’s wedding with another...