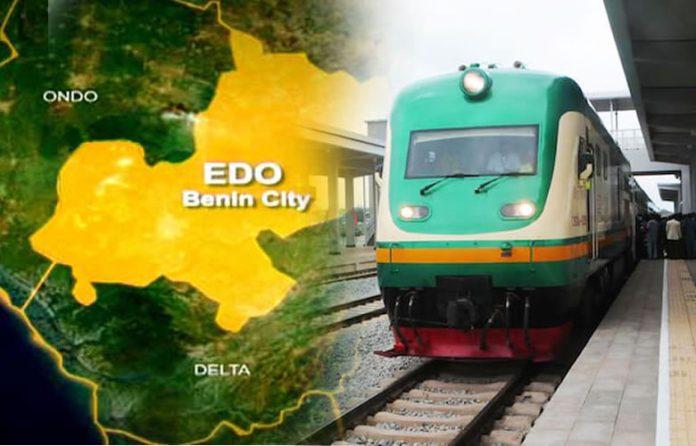 Gunmen who abducted 31 Edo train passengers on Saturday have allegedly demanded N620m ransom for their release.

NAIJA LIVE TV gathered on Monday that the criminals had presented their demands to the families of the abductees.

The Executive Director, Esan Youth for Good Governance and Social Justice, Benson Odia, disclosed that the kidnappers were demanding N20m for each victim.

This was as the police anti-terrorism squad and the Nigerian Railway Corporation on Monday met to strategise on ways to rescue the train passengers.

Speaking with news reporters, Odia stated that the demand was absurd, calling on the authorities to intensify efforts in rescuing the 31 hostages in the custody of the kidnappers.

He also said that the Minister of Transportation, Mu’azu Sambo and the Managing Director, Nigeria Railway Corporation, Fidel Okhiria were at Igueben to assess the situation.

Odia said the authorities promised to deploy helicopters on Tuesday to locate where the victims were kept in the bush.

He said, “I can tell you that the kidnappers have demanded N20m, totalling N620m. This is absurd and I don’t know where poor people will be able to raise that amount of money.’’

The Edo state police spokesman, Chidi Nwabuzor could not confirm the veracity of the claim.

However, the Edo State Commissioner for Communication and Orientation, Chris Nehikhare, disclosed that six victims had been rescued, adding that efforts were ongoing to rescue the remaining 26 victims.

The commissioner in a statement noted that Governor Godwin Obaseki had given directives that the criminals should be arrested.

He added that two wanted kidnappers who were not connected to the present case have been arrested and would also help the police in their investigation.

The statement read, “Following the directive from Governor Godwin Obaseki that the kidnappers that attacked the train in Igueben on Saturday be smoked out of their hiding and the persons abducted be rescued, we are happy to announce that six persons have been rescued.

“The six persons are: a 65-year-old man, a nursing mother and her baby, a six-year-old girl and two siblings; aged two and five years old.

“We commend the efforts of the rescue team in the bushes and their support staff that have been working tirelessly since the incident occurred to ensure the kidnapped passengers are rescued and reunited with their families.

“We are confident that the other victims will be rescued soon as the highly motivated security personnel are in high spirits and have doubled down on the hot chase of the kidnappers.’’

“As events unfold in the bushes, be assured that we will keep you posted and we crave the support of all stakeholders, particularly the media, to stay with the facts and avoid sensational reports that could further inflict emotional pain on the families and friends of the victims who are already in distress. Operation Bush Combing continues,” Nehikhare added.

Also, the NRC MD, in an interview with Channels TV on Monday, said the agency had got approval to acquire sophisticated security systems.

On whether lessons were learnt from the attack on the Abuja-Kaduna train, he stated, “We learned a lot from the last attack.

improved our security by increasing the number of personnel; vigilantes, army, police, and some technology but we are not there yet.“We have to continue to improve and make sure that we get the required result.

“On Itakpe-Warri, we have engaged the local community to protect and also support the security architecture we have in place.

“So, I think we have improved but there is nothing that cannot be sabotaged with the will and determination of the saboteurs.”

Meanwhile, the Edo State Police Command said it has stepped up its ongoing operations to rescue the abductees.

The command’s spokesman, Nwabuzor, disclosed that the rescue operation was being carried out in a way that would not compromise the process.

He stated, “I can only tell you that six persons have been rescued so far. The Commissioner of Police, Mohammed Dankwara has assured citizens of Edo that efforts are on to apprehend the kidnappers and rescue other victims.’’

When asked if the gunmen had made contact with the families of the victims, he stated, “That falls under the other thing I should not mention because the criminals are also monitoring what is being said about the situation.’’

In a related development, the President of Igueben Area Customary Court, Mrs Precious Aigbonoga, was kidnapped on Monday morning in Ugoneki, while on her way to Court in the Igueben Local Government Area, Edo State.

Disclosing this in a statement, the Nigeria Bar Association Publicity Secretary, Festus Usiobaifo said the NBA was working closely with the Edo State Police Command to rescue her.

The statement read, “The President of Igueben Area Customary Court, His Honour, Mrs Precious Aigbonoga, was kidnapped on Monday morning around Ugoneki axis, on her way to court in Igueben Local Government Area, Edo State.

Her Honour is the wife of our colleague, Mr. Afebu Aigbonoga, PDP candidate, Etsako West Constituency 1. The Chairman of the Lion Bar, Chief Nosa Francis Edo-Osagie is deeply sad by this news and condemns, in strong terms, the worrisome insensitivity of these bandits in kidnapping Mrs Precious Aigbonoga; an easygoing, gentle, and hardworking judicial officer.’’

“The executive of NBA is in close touch with the Commissioner of Police, Mohammed Dankwara. By the grace of God Almighty, His Honour shall be rescued unhurt, and the bandits brought to book, Amen. Let us keep His Honour in our prayers, please,” the statement added.

NAIJA LIVE TV had on Monday reported that the Managing Director and Chief Executive of NRC said that security agencies were on the trail of the abductors believed to be armed herdsmen.

He said, “The police, vigilante and Army are all after the people in the bush; that’s all I can say. There are certain things that we need to clear before we issue a statement.”

“We will give necessary support to Edo State Police Command and Railway Police Command on the rescue of the abducted victims; efforts are being intensified to rescue them and arrest the culprits,’’ he assured.

When asked about the nature of support being given to the state command, Adejobi simply stated, ‘’Support is support. It’s a security matter’’ and declined further comment.

There were reports that the Inspector-General of Police, Usman Baba, had dispatched police special squads, including the Intelligence Response Team and Anti-Terrorism Squad to Edo State to rescue the victims.

The squads, it was gathered, would complement the efforts of the police in the state.

A senior officer stated, “The IG has deployed the IRT and the anti-terrorism squad to Edo from Force headquarters. But the security agencies should have taken pre-emptive measures by deploying armed agents around the stations.”

Kaduna Train Hostages’ Negotiator Mamu Is In Our Custody – DSS