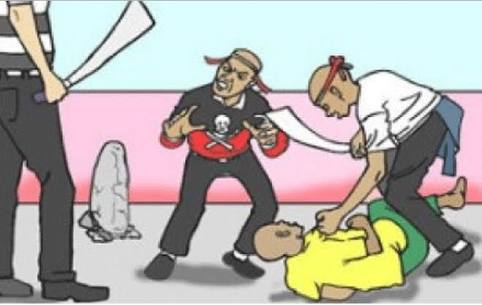 The Patriotism Advancement and Community Orientation Network (PACON), a non-governmental organization have said it will hold an anti-cultism and drug abuse sensitization in otuoke community, ogbia local government area of Bayelsa state. This was made known after the organization met with the president, otuoke youth council, Mr. Fred Ademe in his hometown.

PACON which have since embarked on a school-to-school and community-to-community anti-cultism and drug abuse sensitization exercise in yenagoa says it is hightime communities in the hinterland of the state benefited from the exercise as they call on more support from the government and public in general. The group through it’s arch convener, Mr. Aluzu Augustine said “we are here today to show support for Lilian Friday, after she underwent a successful surgical operation to her right eye which was damaged by suspected female cultists for refusing to join their group.

“PACON is concerned with the reports of cultism in otuoke community and shall begin its sensitization in the community to rescue the young ones from the grip of cultism and drug abuse”. He said

Mr. Ademe, while lamenting the increased rate of cultism and cult related activities in the community thanked the NGO and promised to collaborate with the organization to ensure the youths get the message that it is imperative to say no to cultism and drug abuse. He said the otuoke community have in recent times have been saddened with reports of cult related attacks in the community even as the leaders of the community have put measures in place to make otuoke inhabitable for cultists. “Just 2 weeks ago, the community leadership held a meeting with the Parents and Teachers Association of community secondary school, otuoke and the issue of cultism was one of the issues that was raised

“The council and the youth president’s forum will be happy to partner with any organization, particularly PACON in any event that will help to consolidate the community’s effort in the fight cultism that is fast becoming a menace in the state.” He concluded.

Mr. Aluzu Augustine says it is imperative for community action against cultism while commending Odi community for taking decisive steps against cultists in recent weeks while calling on other communities in the state to do same noting that Odi community of Kolokuma/Opokuma local government area and Kpansia community in yenagoa local government area have banned cult related activities. “No youth of both communities or elsewhere is permitted to conduct himself in a manner suggesting any cult related behavior. All cult members are now placed on exile.” He said.

Aluzu also called on government to make a strong statement against cultism as well. He decried the inability of security operatives to arrest a certain Josephine, an alleged leader of a notorious female cult group in otuoke community who allegedly damaged the right eye of Lilian Friday, an ss1 student of community secondary school, otuoke for refusing to join her gang. “Some of the cultists are indigenes of our various communities and parents sometimes give them cover. That is why it seems to thrive in most parts of Bayelsa state.

“The government of Bayelsa state have equally failed to make a strong statement against cultism with Lilian Friday’s case. This is a case of a teenager, being attacked by suspected female cultists for refusing to join their group yet the state government could not come to her aid.

“There is need for everyone to join hands in making sure cultism comes to an end in Bayelsa state. From religious leaders to community leaders, we all need to speak in one voice against the monsters of cultism and drug abuse.” He said.