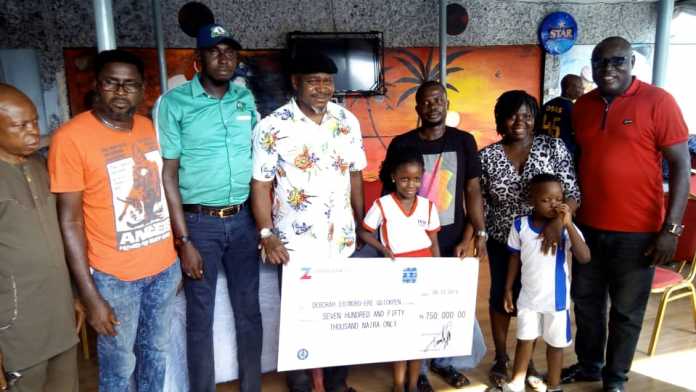 Bayelsa state Governor-elect, Hon. David Lyon says his administration will use sport to restore hope in the youth, adding that sport has an inherent ability to bring people together, particularly the youth.

The Governor-elect who was represented by a governorship aspirant under the All Progressives Congress (APC) and former commissioner for sports in Bayelsa state, Prince Ebitimi Amgbare at the presentation of the sum of seven hundred and fifty thousand naira to seven years old Miss Deborah Quickpen, from Southern Ijaw Local government area of Bayelsa state, who is to represent Nigeria at the African Youth Chess Championship coming up in Namibia this month, at the NUJ Press Centre, Yenagoa on Friday, said sport, by its very nature, encourages participation, which has the capacity to bridge political, ethnic, social and religious divides in society.

According to Hon. Lyon, “it is for this reason that our incoming administration intends to use sport as a veritable tool for development, with the understanding that sport can serve as an impetus for social transformation and change as the state moves to the next of rapid socio-economic development .

He noted that sport can also serve as a tool for crime prevention, conflict resolution and promote inclusive good governance, with a view to creating a peaceful environment for meaningful development.

While appreciating the good gesture of the Governor-elect, recipient of the seven hundred and fifty thousand naira cheque, Miss Deborah Quickpen thanked the Governor-elect for coming to her aid to enable her represent Nigeria at the forthcoming African Youth Chess Championship in Namibia, assuring that she will not disappoint the country at the continental competition.

Earlier, the Bayelsa State Chess Coach, Kigigha Bomo, said Miss Quickpen won gold and a bronze at this year’s national sports festival under category 15 in youth games which qualified her to represent Nigeria at the African Youth Chess Championship in Namibia this month.

He thanked the Governor-elect for funding the trip to Namibia, just as he called on other well meaning individuals and corporate bodies to support the game.

In his remarks, the Convener and Director General of Miss Deborah Quickpen Support Group, Mr. Ada Gwegwe, who was full of praises for the Governor-elect for funding the trip to Namibia to enable the young national chess champion to represent the country in far away Namibia with the sum of seven hundred and fifty thousand naira.

He said the support group had earlier spoken to many persons concerning the sponsorship of little Miss Quickpen, informing that apart from Mr. Ebi Egbe, the Chief Executive Officer of Monimichelle, the firm handling the renovation of the Samson Siasia stadium, who paid her school fees, it was really disturbing before the governor-elect showed up as soon as he was told of the the girl’s plight by Prince Ebitimi Amgbare.

Also speaking, father of the girl, Mr. Ben Quickpen, who also is the current world’s number 10th man in scrabble and a three times national champion in the game, expressed surprise that his daughter would be sponsored to participate in the forthcoming African Chess Youth Championship in Namibia by the Governor-elect whom he had never met in life.

On his part, Chairman, Bayelsa State Council of the Nigeria Union of Journalists (NUJ), Mr Samuel Numonengi, said the good gesture of the Governor-elect in taking up the bills of Miss Quickpen to enable her participate in the African Youth Chess Championship speaks volumes of his benevolence and passion for sports development.

Also speaking, a lecturer with the Niger Delta University, Amassoma, Dr. Phillips Okolo described the gesture of the Governor-elect as a pointer to good things to come to Bayelsa state.

He used the occasion to appeal to the incoming administration to run an open and inclusive government where every stakeholder would be accommodated irrespective of political divides.

”A better Bayelsa will emerge under Lyon administration” – Chief Ibokolo

Crime Watch Abekikokos - January 20, 2020 - 9:23 am
0
A married woman in her early 40s, Omowunmi Ishola has confessed that she raped her gateman because he is more handsome than...

I Have 39 More Prophecies That Will Come To...

“I rape my gateman because he’s more handsome than my husband”...