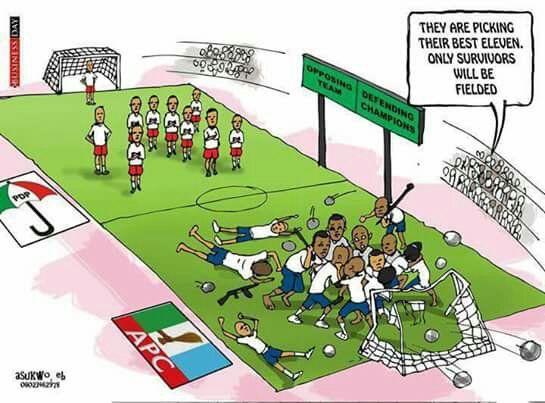 Ekiti State Governor, Mr. Ayodele Fayose has raised the alarm over alleged plot by the All Progressives Congress (APC) governorship candidate in the State, Dr. Kayode Fayemi to implicate him and some chieftains of the Peoples Democratic Party (PDP) with murder.

The governor alleged that a meeting was held in Isan-Ekiti, the hometown of Dr. Kayode Fayemi, the flag bearer of the APC in the July 14, 2018 governorship election where a certain thug popularly known as Agbara was assigned with the task of carrying out the sinister plot of killing people and dumping their corpses in houses belonging to PDP chieftains as well as Fajuyi Park.

It should be recalled that at the APC secretariat on Friday, a chieftain of the APC, Hon. Opeyemi Bamidele and five others were hit by shots by a policeman brought from Lagos to protect one of the APC chieftains.

The governor said; “This alarm has become necessary because of a meeting that was held yesterday, in Isan-Ekiti, the hometown of Dr. Kayode Fayemi, the flag bearer of the APC in the July 14, 2018 governorship election.

“They have hired one Agbara to kill one or two indigenes of Ekiti and dump their bodies in the houses of PDP leaders, Fajuyi Park, in Ado Ekiti or near the government house. This is an attempt to link me and my party with killings.

“This new plot is as a result of the failure of the plot to link me with the shooting of Hon. Michael Opeyemi Bamidele (MOB) and others by a policeman at the APC secretariat on Friday.

“We take exception to this sinister plot as we will not be a party to violence act. Ekiti has been peaceful in the last three and half years, we want to keep enjoying this peace and will not want it disrupted because of politics. Our ambition is not worthy of the blood of any Ekiti indigene.

“We therefore call on the police and other security agencies to be vigilant and Ekiti people to please be watchful. Your life and my life will not be used as sacrifice for this election.

“I want to plead with everyone to please take note that violence is not an option. I also urge the federal government to take necessary steps to save Ekiti from further crisis.”