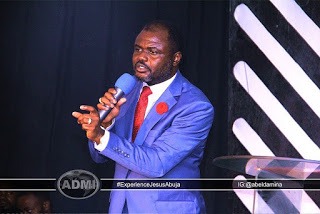 The host of Righteous Invasion Of Truth [R.I.O.T.] Dr Abel Damina has claimed that Fornication is not a sin.

Speaking in one of his numerous messages shared online, the founder of Abel Damina Ministries and Power City International Church said God does not punishes unbeliever the same way he does with believers.

“The way God will deal with an unbeliever is not the same way he will deal with you because you are his sons. What a manner of love a father has for his children so we can be call the sons of God.”

According to him, one has to understand the concepts of relationship with God before understanding the punishments he would give to sinners.

Dr Abel Damina said everybody have sin before God right the beginning.

” Do sons of God sin? Of course yes they sin. They sin because they are men. Once you are a man, you could sin. If any man says he has not sin, he deceives himself and the truth is not in him.” he said.

In giving his explanation about sin, the controversial pastor said coming short before God is sin. According to him, Fornication is not a sin.

You can watch the complete video here.