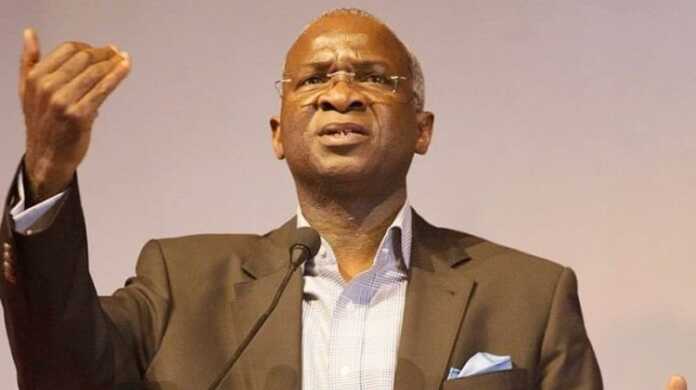 A video of former Governor of Lagos State, Babatunde Raji Fashola, describing the administration of former President, Goodluck Jonathan, as incompetent and amateurish in the management of the country’s economy has surfaced online.

Fashola, who was speaking at the 7th annual Bola Tinubu Colloquium in 2015, said the lack of adequate power supply in the country was because those who were managing the economy were incompetent.

The ex-governor who was listing state achievement on power, as captured by Channels Television, said the economy of Nigeria, as at then, was being managed by amateurs.

Fashola, in 2015, was appointed by President Muhammadu Buhari to be the Minister of Power, Works and Housing.

He was, however, reappointed as Minister of Works and Housing after President Buhari’s re-election in 2019.

“We do not have power because power is difficult to generate, we have darkness because we have incompetent people managing our economy. As one of my friends fondly calls them, our economy is being managed by amateurs. Thank you,” he had said.

He also appraised President Buhari who was in attendance.

“When General Buhari left this nation, many who were old enough to discern said he did not smile but he was effective but he was committed to governing by law. Sadly, when we got those who were ready to smile at us, this is where we are. So that, as you go to vote on Saturday, remember that leaders are not elected to go and pray, they are not elected to be nice.

They are required to be compassionate, but they are elected to be effective and efficient and govern with the rule of law. General Muhammadu Buhari, you are welcome sir,” he had said.

When Fashola left power ministry, there was no significant improvement and since then, Nigerians have still been complaining.

Recently, the current Minister of Power, Sale Mamman, stated that the cause of the power outage being experienced in parts of the country had to do with the breaking down of eight power plants.

The minister added that about seven other plants were experiencing gas constraints while the Jebba Power Plant was “shut down for annual maintenance.”

The minister had said, “I sincerely regret the recent power outages across the nation and the difficulties it has brought with it, and wish to assure my fellow Nigerians that everyone involved is working assiduously to restore the national grid to its previous historical levels and exceed that.

“The problem is caused by the breakdown of some National Integrated Power Plants supplying electricity to the national grid. The plants are namely, Sapele, Afam, Olonrunsogo, Omotosho, Ibom, Egbin, Alaoji and Ihovbor. The Jebba Power Plant was shut down for annual maintenance.”