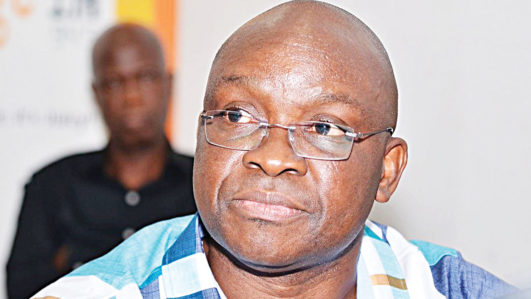 Ekiti State governor, Ayodele Fayose, has accused the All Progressives Congress (APC) and the Independent National Electoral Commission (INEC) of colluding to preload card readers meant for the July 14 governorship election in the state, with a view to manipulating the poll in favour of the APC candidate, Dr Kayode Fayemi.
The governor also said the criminal act is being perpetrated in Akure, Ondo State, in collaboration with the Ondo State government.

He said over 550 polling units spread across the state were targeted to be preloaded with between 50 and 200 votes in favour of the APC.

However, the Kayode Fayemi Campaign Organisation has debunked the allegations, saying the ghost of the Federal Government-backed 2014 poll fraud was haunting the accuser.

In a statement by Fayose’s Chief Press Secretary, Mr. Idowu Adelusi, yesterday, the outgoing governor alleged that APC was also printing fake voter cards in Akure with support from the Ondo State government, as well as planning to bring in about 14,000 people from Ondo State to vote in Ekiti.

He said: “I don’t want to bring this picture out yet, but those who said preloading is not possible are lying. Right now, they are doing manual preloading in Akure, as I speak. For polling units with over 1,000 voters, they spread the preloading to between 50 and 200 votes per polling unit.

In Ikere, 58 of such polling units were targeted and Ado-Ekiti has 158 of such.”

Fayose also challenged Fayemi to account for the over N46 billion he collected as excess crude oil funds, while in office, stressing that the APC governorship candidate lacked moral right to seek another term after plunging the state into huge debts.