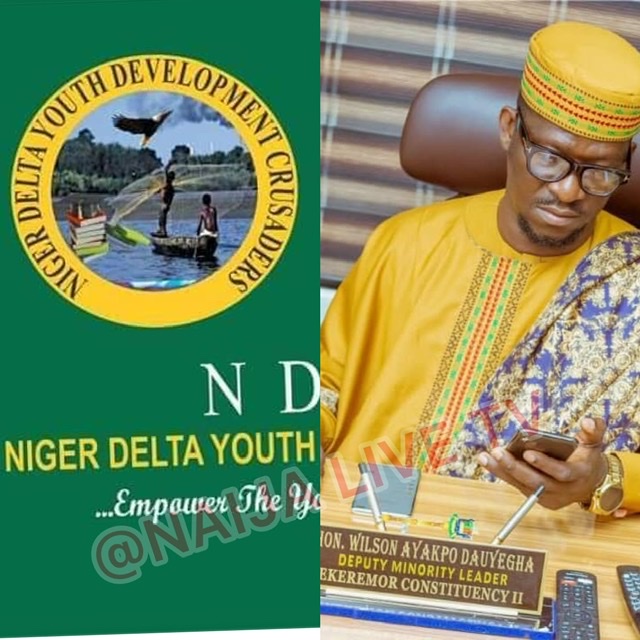 An Apolitical group known as Niger Delta Youth Development crusaders (NDYDC) has chastised the lawmaker representing Ekeremor constituency 11 in the Bayelsa state house of Assembly Hon. Wilson Ayakpo over comments on the Inauguration of the new NDDC board.

NAIJA LIVE TV reported that, Hon. Wilson Ayakpo on Tuesday issued a press release to call for the suspension by the leadership of INC asking President Muhammedu Buhari to immediately constitute the NDDC board

However the apolitical group NDYDC has blow up on the lawmaker over his statement and berated him to face and focus on His legislative business than interfering on the issue in the Niger Delta development Commission board.

The NDYDC also described Hon. Wilson Ayakpo’s comments as highly appaling and his interference to the matter of the NDDC board as a loathsome act, as his duty being a lawmaker is to deliver an effective laws and ensuring adequate development to His Ekeremor constituency.

According to the NDYDC, “the call by the leadership of the INC to President Muhammadu Buhari to immediately constitute the NDDC substantive board after the forensic audit is to ensure effective and smooth running of the board administration and effective representation to the Niger Delta Region”

The group also described the call for the immediate constituting of the NDDC board by the INC as a proper call which mean well for the people of the Niger Delta Region and the call is highly accepted by the People of the region.

The group further described Hon. Wilson’s counter statement to the call by leadership of the INC to Mr. president to immediately constitute the NDDC board as a sycophantic act to gain some Political approbation from some politicians who never has the region development at heart and Mr. President.

The apolitical group, Niger Delta Youth Development crusaders through the National leader Comr. Ani John also known as Abala-1 urged and called on President Buhari to immediately constitute the NDDC board to ensure stability among the commission and to sustain the exiting peace in the region.

The National Leader Comr. Ani John further remainded Hon. Wilson that the Niger Delta region is far bigger than one individual and he should be guided.

” Wilson should know that we are talking about Niger Delta Region, not the few individuals that he is representing in the state assembly.” “Wilson has no capacity to speak for the people of Niger Delta. NDDC is not Ekeremor constituency 11.”

“Our communities and the region is so backward and underdeveloped because of such individuals we call representatives or leaders, in fact, Hon. Wilson needs to tender unreserve apologies to INC and the people of Niger Delta” Comr. Ani Stated.