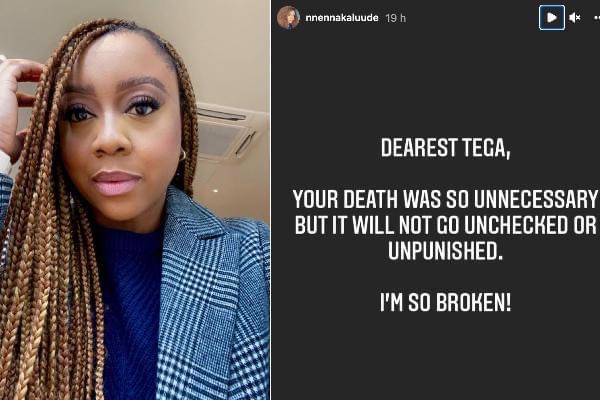 Nnenna Kalu-Ude, a former member of the popular church, Commonwealth Of Zion Assembly has indicted the founder of the church, Biodun Fatoyinbo in the death of her friend and singer, Tega.

In a series of posts on her InstaStories, Kalu-Ude alleged that Fatoyinbo owed salaries, didn’t treat his staff well and repeated claims that the church founder made sexual overtures at his members, all of which were covered up by his supporters in church.

Kalu-Ude said; “Dearest Tega your death was so unnecessary but it will not go unpunished. I’m so broken. I’ve never seen such cruelty!!! Not paying salaries for months but expecting them to still show up everyday.

“For so long, people have kept quiet, suffering in silence, going through all forms of humiliation all in the name of ‘testing them to see who is faithful.’

“For so long, they have played with people like a game of chess. Human beings that Jesus Himself shed His blood for. It’s about to be 2019 again. I’m done keeping quiet.

“Tega was experiencing pregnancy difficulties. Spent the entire holidays in the hospital bed. But no visit from anyone. Tega bled throughout one of the trips. But she was still mandated to travel, to be in church working. The girl was flying bike everyday to get to work. How can you use something as inconsequential as a car to taunt people?”

BREAKING: Busola Dakolo, Fatoyinbo to appear in court within 14 days.

Fatoyinbo still in our custody – Police