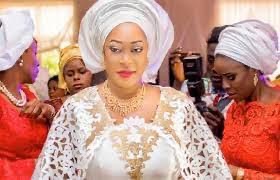 Former first Lady of Enugu state Clara, remarried a wealthy Kaduna businessman who was reportedly introduced to her by the daughter of late President Yar’adua.

Clara who grew up in Katsina state speaks Hausa fluently.

Husband drags wife to court for ‘being a spendthrift’