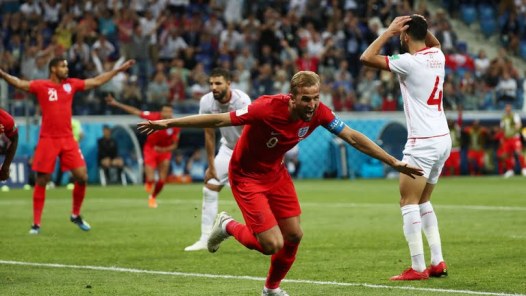 The eighth penalty call at Russia 2018 almost gave Tunisia a share of the points against England at the Volgograd Arena on Monday; but Harry Kane scored in the last minute of the encounter to give England a great beginning to their World Cup campaign.

Harry Kane had given the Three Lions the lead when he got on the end of a rebound while the Tunisians were awarded a penalty after a Kyle Walker infraction.

Jesse Lingard saw his effort saved in the third minute and then he teed up Raheem Sterling but the Manchester City man got his leg tangled.

England started like a house on fire as they pinned the Tunisians to their half with slick passing from the back. The first talking point came on nine minutes when Ashley Young caught Wahbi Khazri with an elbow. The referee gave the England wing back a talking to and that was it.

In the 12th minute, a corner was swung in by Ashley Young and met powerfully by John Stones. Tunisia goalkeeper, Mouez Hassen, clawed out a save but Harry Kane was on hand to gobble up the rebound.

Hassen was then forced off with a shoulder injury on 14 minutes. Jordan Henderson tested the substitute goalkeeper, Ben Mustapha, with a long-range effort on 18 minutes but it was comfortable.

Tunisia got a way back into the match when Walker put his arm across Ben Youssef, an infringement that saw the award of a penalty. Sassi drove it to Jordan Pickford’s right; and though the England goalkeeper got a glove on it, he could not prevent the goal. The Tunisian goal was the first by an African side at the 2018 World Cup.

It was all England in the second half as the Tunisians defended well and launched sporadic attacks. But it was to be England’s day as, in the first minute of added time, again from a set piece, another African team was found out.

Kieran Trippier swung in the corner from the right flank, Harry Maguire flicked it on and Kane, unmarked at the back post, guided the ball into the net for his second goal of the game and the winner. Heartbreak for Tunisia and Africa.