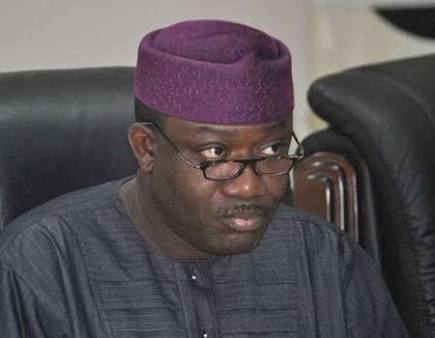 The Peoples Democratic Party (PDP) in Ekiti State has described as sad and strange, support by the All Progressives Congress (APC) in the State and its governorship candidate, Dr. Kayode Fayemi, for the creation of cattle colonies in some local government areas in the State, saying; “an inch of Ekiti lands will not be given to herdsmen for creating of cattle colonies that will later create an inroad for the invasion of Ekitiland.”

State Publicity Secretary of the PDP, Mr. Jackson Adebayo, who made this know while reacting to reported comment by Fayemi that killings by Fulani herdsmen will only stop if lands are provided for the herdsmen as their permanent settlements, added that it was no longer hidden that Fayemi had entered into agreement to create cattle colonies in Orin-Ora, Aramoko, Omuo, Otun, Ise and Erifun in Ado Ekiti.

While on telephone with an Abuja based radio station today, Fayemi had reportedly said in his reaction to the yesterday killing of over 200 people in Plateau State that “States having issues with Fulani herdsmen can only solve the problems permanently by giving lands to the herdsmen so that they can have their own settlements where they can even have an Emir.

“That’s why I have maintained that I will create Cattle Colonies in Ekiti State if I become governor. It is better to give your lands to Fulani herdsmen and live than for them to kill you as they did in Plateau State yesterday.”

Adebayo said in a press statement issued on Monday, that “it was strange that Fayemi has never seen anything wrong in the killing of Nigerians by herdsmen. Instead, he has consistently given tacit support to the killings by insisting on creation of cattle colonies.

“Instead of condemning these killings and destruction of people’s farmlands by herdsmen, Fayemi and his APC have been canvassing support for cattle colonies just to remain in the good book of the Fulani power brokers as being done by the Ondo State Governor, Rotimi Akeredolu and other APC governors.

“Ekiti people will remember that when Fulani herdsmen invaded the farm of Chief Olu Falae and set it ablaze, Governor Akeredolu did not say a word.

“It has therefore become necessary that we alert our people to the danger of returning Fayemi to power because no APC governor will protect its people against marauding herdsmen as done by the PDP government of Governor Ayodele Fayose.”

The Kayode Fayemi Campaign Organisation has debunked claim by Governor Ayodele Fayose that the governorship candidate of the All Progressives Congress, Dr Kayode Fayemi, plans to create cattle colonies across the state for cattle rearers.

A statement by the Director of Media and Publicity, Wole Olujobi, said that Fayose’s fabrication is a rehash of an earlier online press statement traced to the governor’s media aides who have perfected the art of attributing unpopular positions or comments on public issues to innocent people.

He said Fayemi is noted for the protection of life and property of his people as shown during his four years in the saddle of Ekiti State government.

“Fayemi’s position on farmers-herders clash is focussed on protecting lives and property. More lives had been lost during the Fayose administration with his hare-brained policy than it ever happened under our administration.

“We ensured harmonious relationship between our indigenous and non-indigenous population and there was absolutely zero tolerance for farm destruction.

“It is to be noted that all the resources provided for security forces by Fayemi’s administration to protect farming communities particularly in Iyemero and Oke Ako axis were summarily cancelled when Fayose took over the administration of Ekiti State.”

Counselling Fayose to direct his energies to good governance and transparent conduct of government’s affairs, Olujobi said Fayemi never spoke with any reporter anywhere on the creation of cattle colonies.

“The false story about Fayemi talking about creating cattle colonies in Ekiti State was first published online about a month ago and it was discovered that it was orchestrated by Fayose’s media aide, who published the story on a cloned website of an online publication.

“Adebayo Jackson in his latest press statement is just doing a rehash of a dead news item in the most hackneyed manner that Fayose’s media men have been spreading falsehoods in the media space.

“Fayose and his media handlers have developed a notoriety for reckless lies and, unfortunately, they are not ashamed of their integrity being soiled in their unedifying enterprise.

“Honourable people that cherish their integrity would not take seriously any news items from Fayose and his men that seek to attribute unpopular comments on public issues to his political opponents.

“In the last one year, Fayose’s men have been in the habit of concocting press interviews and attribute unpopular comments and remarks in the interviews to innocent people that never spoke with any reporters.

“They did it to Fayemi’s wife when they said the woman abused President Muhammadu Buhari for not supporting her husband.

“They did it to APC State Chairman, Jide Awe, when they concocted an interview that Awe abused Pastor Adejare Adeboye of the Redeemed Church of God for visiting Fayose in the Government House.

“They also did it to APC State Publicity Secretary, Taiwo Olatunbosun, when Fayose’s media aide concocted a story that Olatunbosun addressed reporters where he purportedly said that Buhari’s wife was involved in Halliburton scandal and asking the woman to defend herself whereas these innocent people never addressed reporters anywhere.

“It is a pity that the administration of our state is in the hands of the people who are a perfect match in integrity deficiency.

“Fayose and his men have a background of infamy they are coming from and so we can understand their nuisance.

“Fortunately, July 14 governorship election is around the corner when these characters will be chased away from the life of Ekiti State to enable the people reclaim their land and restore their values that have been thrown into the mud by hustlers who have chosen Ekiti State as a trading post for the benefit of one man,” Olujobi said.