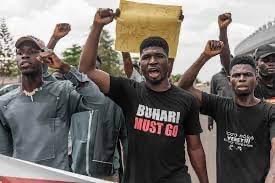 It was gathered that about ten activists went to the church on Sunday morning to worship at the church but some of them were surprisingly rounded up and arrested by the church security guards who later handed them over to the DSS.

According to report, six of the activists were whisked away in a Hilux van and two power bikes.

The activists were manhandled and beaten by the DSS operatives on the church premises, who also seized their mobile phones.

A source said, “Security men at Dunamis Gospel Church have arrested activists who wore #BuhariMustGo T-shirts to their church service: the church security later handed them over to DSS officials who are currently torturing them.