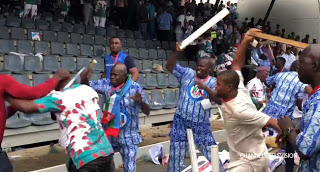 There is no longer any doubt whatsoever, that the Delta State Chapter of the All Progressives Congress, APC, is a complete shame and
humiliating embarrassment to Delta State.

The ugly war they unleashed on themselves during their ‘arrangee’ national convention at the Eagle Square, Abuja on Saturday June 23,
2018, right in front of millions of Nigerians and several more millions of global citizens watching their show of shame on all the cable television networks, is ample evidence and enough testimony to write-off the Delta APC as a bunch of crude, reckless, warlike,
undisciplined, ruthless and uncontrollable gang of rabble-rousers and trouble makers, who are dangerously prone to violence, destruction and blood-letting.

We in the Delta PDP have always warned and cautioned innocent and unsuspecting Deltans on the penchant and proximity of Delta APC to
embrace confusion, violence and pandemonium in all their gatherings and activities and our fears were justified with the gruesome and deliberate murder of Mr. Jeremiah Oghoveta, a chairmanship candidate, from Ward 10, Otu-Jeremi, Ughelli South local government area, of Delta State, during their ward congress as well as the subsequent violence that marred the parallel congresses in the State; a bloody and fractured process, which incidentally produced the delegates that went to Abuja to continue their show of shame and embarrassment to Delta State.

A graphic, live commentary of what transpired between the APC parallel factions during the national convention at Eagle square, published by a leading national newspaper in Nigeria is an all time low for Delta APC.

Sadly, the violence and bloody confrontation of the Delta APC factions in another APC organized event, this time their most important political activity, the national convention, in the Federal Capital of Nigeria, is a clear warning signal to all Deltans to beware of the APC and steer clear of all their activities henceforth in Delta State, in order to avoid becoming innocent victims and casualties of the deliberate and uncontrollable actions of a group of very irresponsible and shameless politicians, who have brought disgrace to Delta State.

It is truly unfortunate that this behaviour and strategy has now become synonymous with Delta APC and indeed the APC as a whole and if this is the way and manner they want to govern Delta State and Nigeria, then their failure in the next elections has finally been sealed and settled.

We want to repeat once again that what is happening in the APC, with all these violence and deaths, is not a good sign at all and what the APC has done is to send out a dangerous warning signals to all and sundry that they will do everything possible, including violence and
taking lives to achieve their aim in 2019.

We must not allow APC to endanger the lives and property of Deltans again because of their wild and uncontrollable ambition to get power at all cost. Clearly there is a limit to political brigandage and adventurism

Deltans say NO to violence. Deltans will reject APC in 2019. A word is enough for the wise.