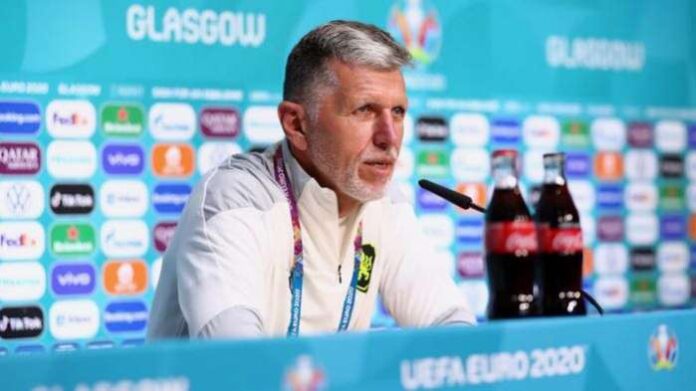 Czech Republic coach Jaroslav Silhavy is anticipating a close-run Euro 2020 opener against Scotland after missing two games against them last year due to a Covid-19 outbreak.

Czech Republic coach Jaroslav Silhavy is anticipating a close-run Euro 2020 opener against Scotland after missing two games against them last year due to a Covid-19 outbreak.

“I only saw the previous games on TV,” said the former defender who took over as Czech manager in September 2018.

In the Nations League last autumn, the Czechs lost 2-1 at home with a makeshift team hastily put together after the entire first team went into quarantine as two staff had tested positive for the virus.

A month later, they lost 1-0 at Hampden Park with Covid-positive Silhavy absent.

“I believe we will use the experience to finally beat Scotland,” the 59-year-old told reporters ahead of the match at Hampden on Monday.

“We are quite nervous, but I think it’s normal given what we are facing, which is the peak of our careers with the national team,” he added.

Scotland, supported by 12 000 fans in Glasgow, will notably be boosted by the presence of Arsenal defender Kieran Tierney, who didn’t feature in either game against the Czechs.

“I think against the games we have played with them, they are stronger now, they play more efficiently,” said Silhavy.

“It will be a close game decided by details.”

The two countries have been embroiled in a racism row following Rangers’ Europa League last-16 game against Slavia Prague in April.

Just before the Euro, the Czechs had to move their base camp home from Edinburgh over strict Covid rules applied by Scotland.

“There is definitely no animosity on our part, and I believe tomorrow’s game will be fair, pure sport for the audience to enjoy,” said Silhavy.

Just like Scotland, the Czechs will take a stand, not the knee, before the game to reinforce Uefa’s anti-racism drive.

“We want to focus purely on football,” Silhavy said in a statement on Sunday.

“I understand society perceives these issues as important, and the national team has condemned racism in any form, but… we have chosen our own solution,” he added.