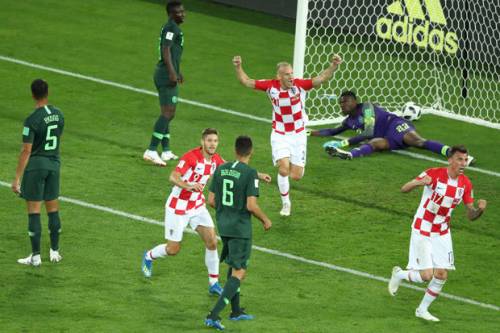 Croatia inflicted a two-nil defeat on the Super Eagles of Nigeria on Saturday evening to ensure Africa is still searching for its first Russia 2018 World Cup victory after three matches.

Nigeria created the first chance of the match in the 12th minute, when Mikel Obi won a battle of two captains, dispossessing Luca Modric of the ball before lobbing it towards Odion Ighalo. However, Croatia goalkeeper Danijel Subasic intervened before any havoc could be wreaked.

A little over a minute later, Ivan Perisic almost gave Croatia the lead after neat footwork by Besic, but his effort flew just over the bar. Andrej Kramaric then fired a shot from outside the box in the 16th minute, but it travelled narrowly wide of Francis Uzoho’s right post. 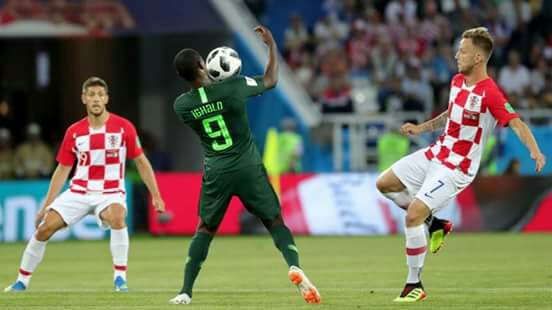 In the 32nd minute, a Nigerian scored but it was Croatia that took the lead. A flying header from Mario Mandzukic, first flicked on by Rebic from a Modric corner kick, was going wide, but it hit Etebo’s leg and was accidentally deflected home. Own goal!

The Europeans could have doubled their lead when Rakitic set up Kramaric with a cross, but the TSG 1899 Hoffenheim striker headed over the bar.

Nigeria slowly started to grow into the game and their best chance fell to the feet of Victor Moses, but the Chelsea man drilled his shot well over the bar in the final minute of the first half. That was after Alex Iwobi had rifled a drive towards the opposition goal, but it was blocked by Liverpool defender Dejan Lovren.

The Super Eagles began the second half with real attacking intent that resulted in three consecutive corners, but they failed to convert none of them.

Nigeria created the first effort on target of the second half, Bryan Idowu working out a 59th-minute cross for Ighalo, whose tame header was calmly picked up by Subasic. Croatia then subbed Kramaric for Marcelo Brozovic, to which Nigeria Coach Gernot Rohr responded by bringing on Ahmed Musa in place of Iwobi.

Croatia were awarded a penalty after a tangle between William Troost-Ekong and Mandzukic in the battle to head a corner kick, and Modric converted it coolly in the 71st minute.

Rohr’s response was to thrust in Kelechi Iheanacho in place of Ighalo, after which Croatia’ Zlatko Dali removed Rebic for Real Madrid’s Mateo Kovacic.

Simy Nwankwo was brought in for Mikel with four minutes left on the clock. Still, Croatia could have made it three-nil in stoppage time but Perisic could only managed a tame short when one-on-one with Uzoho.

Like other African countries, Nigeria must now avoid defeat in their next game — against Iceland on June 22 — to avoid boarding an early plane out of Russia.