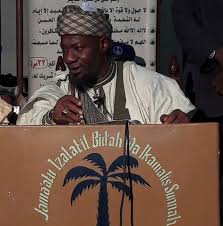 A Mobile Court in Kaduna State has convicted a popular Islamic cleric, Sheikh Yusuf Sambo Rigachukun and his son, for violating the quarantine order on COVID-19.

Commissioner of Justice and Attorney General, Aisha Dikko, made the announcement in a statement on Monday.

The cleric and his son were arrested at Kaduna State University (KASU) junction, for violating the stay at home order and not wearing face masks.

The preacher explained that he was on his way to the Kaduna State Media Corporation (KSMC) for a radio programme.

The commissioner said the duo were charged for not wearing face masks and were fined N5,000 each.

“In addition, the court asked the cleric to perform community service, by informing the public on how to stop the spread of COVID-19,”,the statement added.

Dressed in full uniform, he was arrested while driving in from Abuja with three other passengers who were not wearing face masks.

The official noted that the General identified himself and said he was coming from Abuja on official duty.

“However, the court tried and convicted the other three passengers, for not complying with the stay at home order and wearing face masks”, she said.

Aisha Dikko disclosed that 75 culprits were convicted out of the 105 people who violated the ban on inter-state travel.

They were nabbed at the border between Kaduna and Abuja, as well as the Kaduna-Katsina state border.

NDDC: ‘Ask her four husbands about her character’ –...