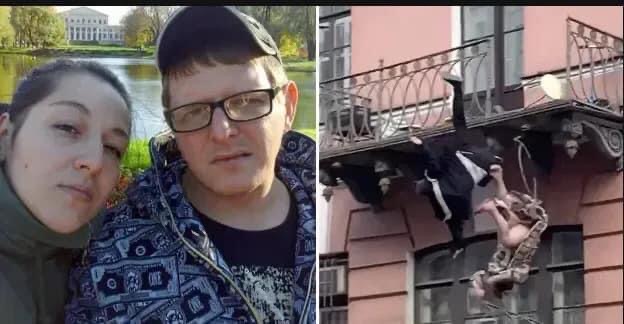 A couple smashed through their balcony railings and fell 25ft to the pavement below while having an argument.

Footage shows Olga Volkova and Yevgeny Karlagin, both 35, struggling on the balcony of their second-floor home in St Petersburg, Russia, on Saturday morning, May 29.

While the pair were arguing, they smashed into the balcony railings which suddenly broke and caused the couple to fall onto the concrete below.

Ms Volkova was wearing underwear with a robe or blanket wrapped around her when they fell, while Mr Karlagin was fully dressed.

The pair were rushed to hospital with “serious” injuries, reported local media.

Both are said to have suffered broken limbs but they are not in a critical condition.

Eyewitnesses said they saw the pair, who have a young son, arguing at around 10am before they fell from the balcony.

Someone with medical experience was nearby and said they had both survived after checking their pulses. An ambulance was then called.