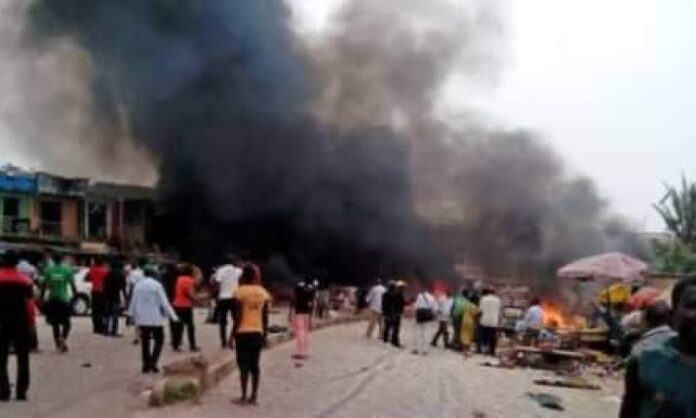 A mother and her two children were on Sunday evening severely injured after a gas explosion occurred along the Azikoro road in Ekeki community in Yenagoa Local Government Area of Bayelsa State.

NAIJA LIVE TV gathered that the children ages between 6 and 8 years were with their mother at about 6.30pm when the explosion occurred from their kitchen.

A close neighbor, told NAIJA LIVE TV that the three victims were home awaiting the arrival of the husband, who is a commercial motorcyclist popularly known as Keke Napep from Kogi State, when the odour of gas leakage was perceived.

“Upon perceiving the smell of the gas, the woman left the children and switched on a tourch light to check the leakage. What was heard next was a huge explosion which threw open their iron door and shook the building.”

Some other residents confirmed to NAIJA LIVE TV that the sound of the explosion threw neigbours into panic as it shook the foundation of some buildings in the area.

A visit to the building showed that the explosion threw up a ball of fire and the three severely injured family were rescued by neighbors and taken to the Government House Clinic,” the 6years old boy was severely burnt because he was lying down naked when the explosion occurred. The mother and the other eight years old boy were severely affected too.”

Already, neighbors and good Samaritans have started pulling resources together to assist the victims, while calling on the Bayelsa and Kogi State Government to assist the poor family during these trying period of their lives.

“No Fracas Between Mrs Gentle Emela and estranged wife of Ex-rector of Institute of Tourism Mgt. Mrs Tombra Johnson“ – Sources

Bayelsa to clamp down on illegal refinery operators from Rivers

REVEALED: How ex-Oyo governor was found dead in his...