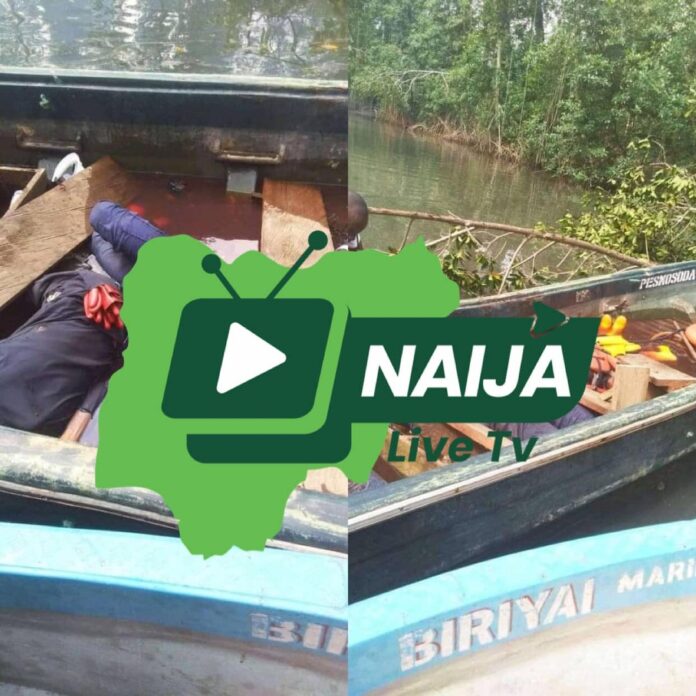 YENAGOA– Security Personnel and Youths from the various clans of Nembe and Brass Local Government Councils of Bayelsa have launched a manhunt for the killers of the two oil workers and one personnel of the Nigerian Security and Civil Defence corps along the Obama creek in Okoroma community of the State.

NAIJA LIVE TV gathered that preliminary investigation have shown that the suspected killers came from the Oluasiri and Odioma end of Nembe local Government area and were dressed in Military camouflage with Ijaw war dressed of red and black during the killing on Sunday.

The Youth President of Okoroma Community, Comrade Tarinyu Joseph, who confirmed the development to leadership, also confirmed that the suspected pirates lost one of their own in the shootout with the security personnel attached to the ambushed oil workers.

Tarinyu Joseph said the youths of the various clans and their presidents have been put on alert to notify or apprehend those behind the killing of the oil workers and abduction of the boat driver.

According to Joseph, the Okoroma community had informed the State Governor, Senator Douye Diri of the dangerous activities of these suspected pirates coming in from the Oluasiri axis but there was no reaction until the ambush on Sunday.

Suspected Sea pirates had at the early hours of Sunday launched multiple ambush on some Workers with the Nigerian Agip Oil Company (NAOC) in Okoroma and Ogbokiri –Akassa communities of Nembe and Brass Local Government areas of Bayelsa State.

The gunmen reportedly shot dead two workers of the Nigerian Agip Oil Company and a personnel of the Nigerian Security and Civil Defence Corps (NSCDC). The driver of their boat, who is an indigene of Okoroma community is still declared missing by the locals.

In the ambush that occurred at Ogbokiri-Akassa in Brass Local Government area, six Nigerian Oil workers who were busy doing maintenance job close to their platform were abducted and taking away.

The Agip oil workers and their security personnel were attacked at about 6am on Sunday while working close to a Manifold in Bayelsa.

“No Fracas Between Mrs Gentle Emela and estranged wife of Ex-rector of Institute of Tourism Mgt. Mrs Tombra Johnson“ – Sources

Bayelsa to clamp down on illegal refinery operators from Rivers

Woman cries for help over ‘unlawful’ detention by SWAT...

Ekiti officer remanded for alleged rape of 13-year-old under...