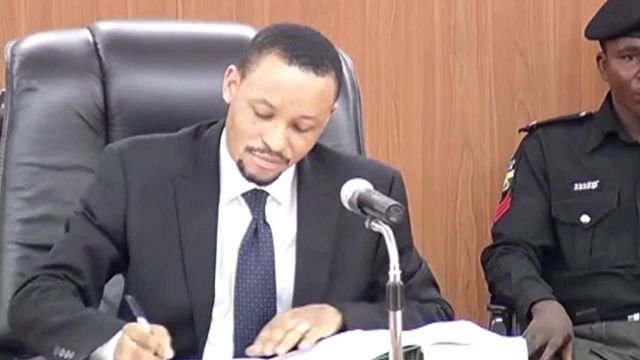 A non-profit making organisation, Access to Justice (A2J) has given the Federal Capital Territory (FCT) Police Command seven days to arrest and prosecute the chairman of the Code of Conduct Tribunal (CCT), Mr. Danladi Umar, over alleged criminal assault on Clement Sargwak, a security guard at Banex plaza, Abuja or risk a law suit.

Deji Ajare, deputy director A2J, stated this in a letter to the FCT Police Command, adding that the police had time to review the footage of the assault and interview all concerned.

“Mr. Danladi Umar has not denied that he, together with his aides, physically assaulted the victim of that attack, Mr. Clement Sargwak. Speaking through his media aide, he (Danladi Umar), has instead alleged that a mob of “Biafran boys” attacked him.”

“Should you be unwilling to undertake the prosecution of the alleged attackers yourselves under Sec. 66 of the Police Act, send the case file to the appropriate prosecuting Ministry, i.e., the Ministry of Justice for arraignment and prosecution; in the event you fail, refuse or neglect to ensure that all Nigerians are equally entitled to the protection of the law by complying with these demands, A2Justice will take out legal proceedings to compel you to undertake the prosecution of Danladi Umar and his collaborators.

“However, we would rather prefer that you use this opportunity to demonstrate to Nigerians that the police force is no respecter of persons, will not pervert or miscarry justice and will perform its constitutional and statutory functions fairly and evenly,” the letter read in part.

How TB Joshua felt uncomfortable, walked to his apartment...