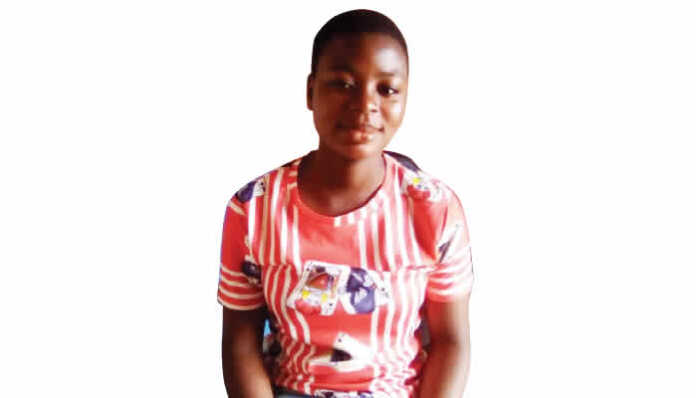 Akanama Stephen, 12, a Junior Secondary School 1 pupil of Mater Dei High School, Imiringi, Ogbia Local Government Area of Bayelsa State, was struck dead by lightning during a heavy rainfall on April 14. His elder sister, Happiness Stephen, in this interview with DANIELS IGONI, speaks on his death

What is your name?

My name is Happiness Stephen.

What is the name of your late younger brother and how old was he?

His name is Stephen Akanama and he was 12 years old.

What happened to him on the day he died?

I don’t know how it happened. But lightning struck him. It was raining heavily and there were thunderstorms and lightning that day. I was inside the house when a woman ran in and told me that my brother was dying. I asked her which of my brothers she was talking about. She said the one that doesn’t like wearing a shirt. I asked her if she meant Stephen and she said yes. She said I should follow her and we left our house together. She took me to the place where he died. The woman said he was playing football in the rain with his friends and the lightning that struck hit him and he fell down. They started hitting his legs to resuscitate him, but he did not regain consciousness. They said the lightning also struck another boy but he regained consciousness when they hit his legs. Unfortunately, my brother did not regain consciousness.

Where were Stephen and his friends playing football when the lightning struck?

They were playing football at ‘The Beach.’ It is a place where beach parties take place in our community. The place is called Opiko. Youths organise beach parties there, especially during Christmas and New Year celebrations.

What was your reaction when you saw Stephen lifeless?

I broke down in tears. I cried inconsolably. I was feeling terrible because his death was too heavy for me to bear. People were consoling me as I cried.

What did you do afterwards?

When the woman came to report Stephen’s death to me, two boys were also with me. So they also followed us to ‘The Beach.’ They helped carry his body and brought it to our house. After a short while, we took him to a nearby hospital and the doctor confirmed him dead. My mother was not at home when the incident happened. She went to Yenagoa (the state capital) to have my phone repaired. I used a neighbour’s phone to call her and inform her about Stephen’s death and she started crying on the phone. She returned home and saw Stephen lying dead. He was then taken to Kolo (another Ogbia community) and was buried there. Before he was buried, a doctor from the Kolo General Hospital also confirmed him dead. Many people came to our house to sympathise with us.

Which school was he attending?

He was in Junior Secondary School 1 in Mater Dei High School, Imiringi. The day he died, he did not come back home after school. He went to play football with his friends after school. I asked our younger brother who came back home after school about Stephen, and he said Stephen was coming. But he did not show up until the rain started falling and there were thunderstorms and lightning. People have said that when lightning strikes someone dead, the person’s body would be stiff and strong, but Stephen’s body was flexible and soft.

How will you describe him?

He was an obedient boy; he was not stubborn. He would always do his house chores, like fetching water from the river, washing the dishes.  He also assisted on the farm. And he liked arts subjects. He said he would like to be a lawyer and he loved reading. He loved playing as well. He ran errands for neighbours. People cried over his death. We loved him. People loved him because he was obedient. We are all sad over his death. We are yet to come to terms with his death. His brothers cannot play again and sleep well at night. They said they see him when they sleep.

What did he do in the house before going to school that fateful day?

Like any other school day, he woke up and went to the river to take his bath, fetch some water and washed the dishes. He returned from the river, wore his uniform, ate some food and left for school. I never saw him again until lightning struck him dead while playing football. It was between 3pm and 4pm. He loved football and he and his friends formed a team. His friends said they would honour him with a football match soon.