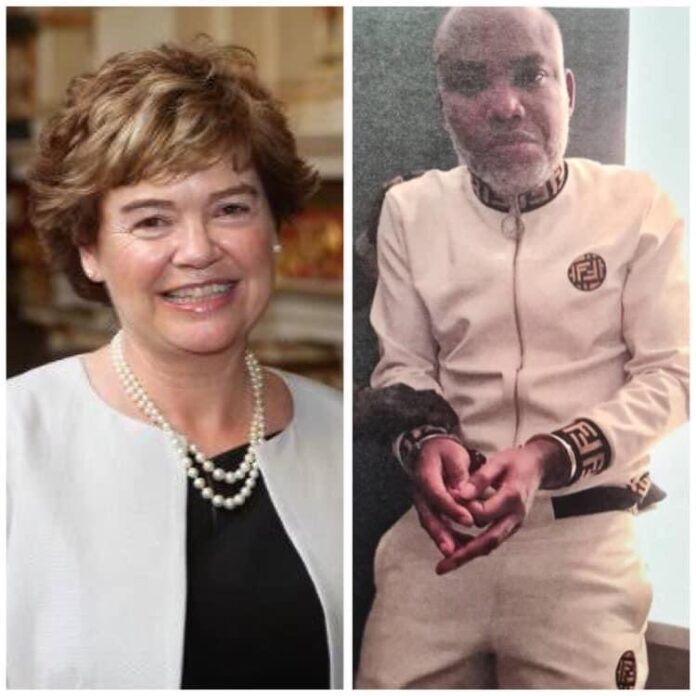 The British High Commission has spoken on the arrest of Nnamdi Kanu, leader of the Indigenous People of Biafra (IPOB).

Dean Hurlock, a spokesperson of the British High Commission, told TheCable that while they can confirm Kanu’s arrest, he was not picked up in the UK where he is based.

The IPOB leader, who is also a UK citizen, had been in the UK since 2017 when he fled Nigeria.

Abubakar Malami, minister of justice and attorney-general of the federation (AGF), had told journalists on Tuesday that he was picked up on Sunday due to “the collaborative efforts of Nigerian intelligence and security services”.

The AGF did not say where exactly the secessionist leader was arrested, but Hurlock told TheCable when contacted that it was outside of the UK.

“We can confirm that Nnamdi Kanu was not arrested in the UK for extradition purposes,” he said via text message.

Kanu was first arrested on October 14, 2015, following years of his campaign for the sovereign state of Biafra.

He was granted bail in April 2017 but fled Nigeria in 2017 after soldiers invaded his residence in Abia state during a military clampdown on IPOB members.

It has been difficult for the government to re-arrest him since then due in part to his UK citizenship.

While in the UK, he set up a militant arm of IPOB whose aim, according to Emma Powerful, IPOB spokesman, is to “halt every criminal activity and terrorist attack on Biafraland.”

But the emergence of the security outfit coincided with a spike in violent attacks in the south-east, with security agents mostly targeted.